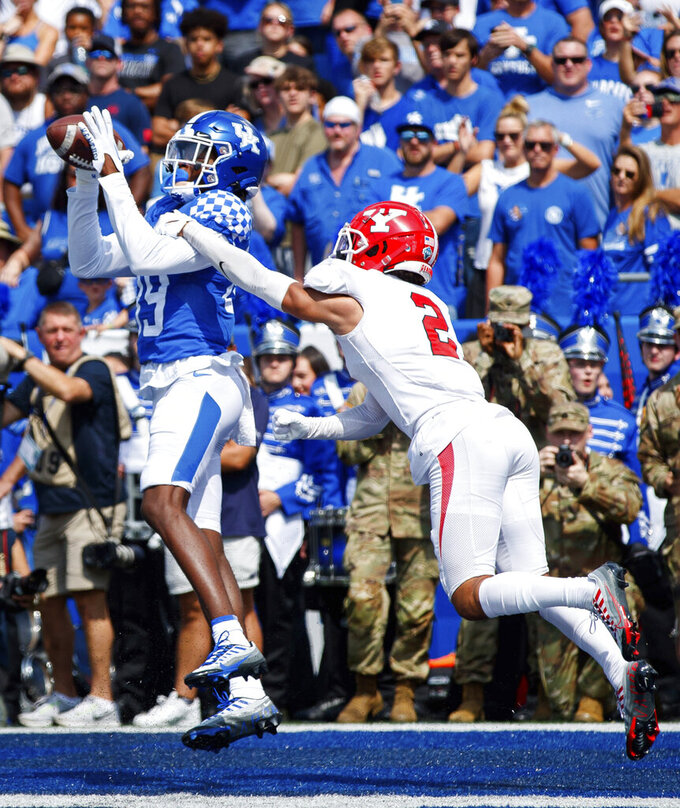 Kentucky wide receiver Chris Lewis (89) catches a pass in the end zone for a touchdown while being guarded by Youngstown State defensive back Troy Jakubec (2) during the first half of an NCAA college football game in Lexington, Ky., Saturday, Sept. 17, 2022. (AP Photo/Michael Clubb) 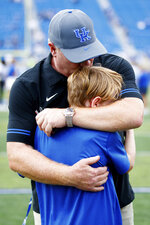 LEXINGTON, Ky. (AP) — An effective combination of punishing defense and Will Levis' arm helped quell any concerns about No. 9 Kentucky letting down after a big victory.

Levis accounted for three touchdowns, Kavosiey Smoke ran for a score and the Wildcats shook off a slow start to shut out Youngstown State 31-0 on Saturday.

Boosted by its first top-10 ranking since October 2007, the Wildcats (3-0) followed up last week's 26-16 Southeastern Conference win at Florida by physically dominating the FCS Penguins (2-1) in the inaugural meeting.

Kentucky outgained YSU 480-192 on the way to its first shutout since beating Miami (Ohio) 42-0 on Sept. 5, 2009. The Penguins failed to convert all 10 third-down chances, two more on fourth and saw their only red-zone chance snuffed out by Kentucky cornerback Carrington Valentine's interception in the end zone.

“It's always a defensive goal to have a shutout," said Valentine, who also broke up a fourth-down pass.

Those stops gave the Wildcats chances and ultimately coach Mark Stoops a victory over his hometown school, even though he downplayed its meaning all week.

“I’m glad it’s all behind us now and really concentrate and move on to to the next games,” said Stoops, who was recognized in a pregame ceremony for becoming Kentucky's winningest coach. The ceremony included his mother and siblings, including his brother Bob, the former Oklahoma coach.

Levis posted his second 300-yard effort in three games, completing 27 of 35 attempts for 377 with sparkling catches by his receivers. He hit Dane Key and Chris Lewis with TD passes of 3 and 2 yards, respectively, and rushed for a 1-yard TD early in the second quarter. That run jump-started the Wildcats after a scoreless opening period in which promising drives stalled and Youngstown's Troy Jakubec intercepted Levis at the 3.

Tayvion Robinson's 15-yard catch-and-run across the middle and attempted hurdle over a defender helped set up Levis' TD on third down. Kentucky scored on four of five possessions, a stretch split up by a fumble on a day it committed three turnovers with two interceptions by Levis.

“One of those games where we did good things in certain phases and other things continue to creep up and are aggravating,” Stoops added. “No panic button, just keep working.”

When Levis was on, though, he was hard to stop. He completed nine consecutive throws with a TD during one stretch before tossing his second scoring pass to begin another streak of seven.

But there's still work to do.

“We know where we can get better and we’re showing flashes again," Levis said. “This just was not good enough, especially how the defense played. Again, just the good things we did, we should have been doing a lot more.”

Key caught six passes for 90 yards, while Smoke rushed 18 times for 66 yards including a 7-yard TD.

Youngstown State managed just 58 yards rushing, including 23 from backup QB Mitch Davidson when the outcome was settled. It had only five plays of 10 yards or more.

“We knew it would be a tough game coming in here, and I can say that I’m not one ounce disappointed in the effort of our kids,” coach Doug Phillips said.

Kentucky had eight passing plays of at least 15 yards, including Levis’ 58-yarder to Ezekiel Blake. ... A spectator ran across the field in the first half and got close to Youngstown State's sideline huddle before jumping into the first row of seats at the 50. He was quickly removed by security.

Youngstown State: The Penguins weren't bowed by the Wildcats as they sacked Levis four times and held them to a fourth-quarter field goal after they got inside the 5. But they crossed into Kentucky territory just three times with Crenshaw's interception quashing their best scoring chance.

Kentucky: Pass protection remains a concern after yielding more sacks and allowing the Penguins to record 10 tackles for loss. But the Wildcats regrouped quickly enough to score almost at will in the middle two quarters for a cushion they didn't relinquish.