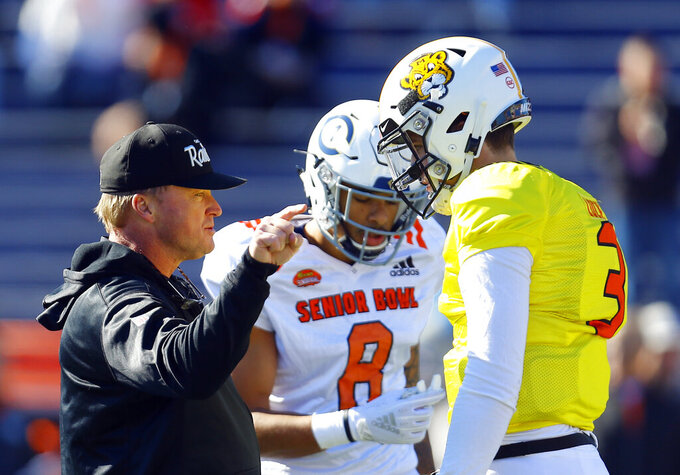 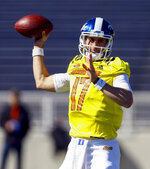 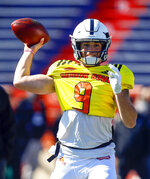 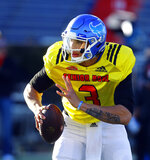 MOBILE, Ala. (AP) — Drew Lock, Daniel Jones and the other Senior Bowl quarterbacks have spent the week practicing with new teammates and learning a simplified NFL offense.

Now, the NFL prospects get to play an actual game Saturday, even though most of the league's coaches, scouts and executives high-tailed it out of town long before kickoff.

That doesn't mean it won't be part of the evaluation process for teams considering using a draft pick on one of the quarterbacks, or any of their teammates, in the showcase game for seniors and junior graduates.

"It'll certainly weigh in, because it's full-speed, live," said Jon Gruden, head coach of the Oakland Raiders and the North team. "When you're live, that's the only evaluation that we're lacking. We could have all these controlled environments all we want, but the best evaluation is live."

The game might not be the biggest part of the equation this week, but it can definitely be a factor.

"I think it matters a lot how well we lead the team down the field, how well you throw the ball," Jones said. "I think that matters a lot. Winning the game is important for me."

The game also features two of the top pass rushers in the draft, Mississippi State's Montez Sweat and Louisiana Tech's Jaylon Ferguson , and a number of other likely early-round picks on the offensive line, like Washington State's Andre Dillard. Plus playmakers such as wide receivers Deebo Samuel of South Carolina and Georgia State's Penny Hart.

The game's eight quarterbacks took different paths to this point. Lock's career as a four-year starter for the Tigers is almost mundane compared to Washington State's Gardner Minshew , whose breakout season came at school No. 4.

They all bring confidence to the weeklong NFL audition.

"From a competitor standpoint, I'm going to have to tell you I do believe I'm the best quarterback in the draft," said Lock, who passed for 10,000-plus yards at Missouri and set a Southeastern Conference record with 44 touchdown passes as a junior.

Grier offers no caveats in his own self-belief and scoffs at any notion that his arm strength might be an issue.

"I don't understand some of the things that have been put out there," he said. "I'm the best quarterback in this draft. I think my arm talent's there and my play will speak for itself.

There's no doubting his production. Grier passed for 300-plus yards in 19 of his 22 games at West Virginia and was fourth in the Heisman voting. Minshew was fifth after leading the nation in passing yards per game.

Stidham didn't put up such big numbers and had a drop-off in production last season while the Tigers struggled on the offensive line and in developing consistent playmakers.

He finished with a 373-yard, five-touchdown performance in a Music City Bowl romp over Purdue and tried to build on that momentum this week.

"You get a chance to meet and play in front of every type of NFL personnel that you can think of," Stidham said. "It's a great opportunity to really showcase your skills. My job is to come out here and execute a new offense and do it at a high level."