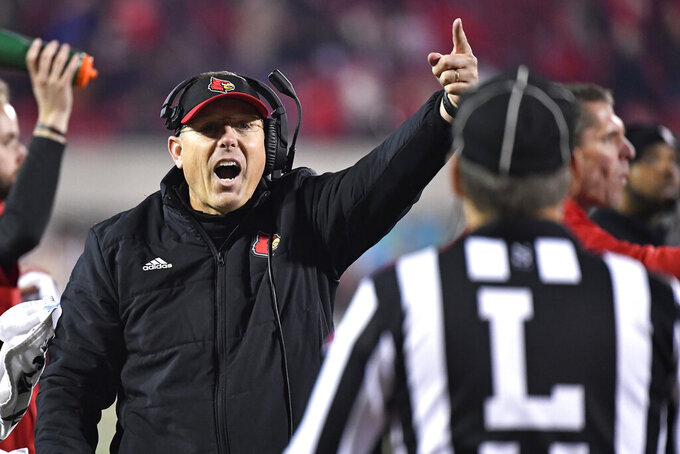 FILE - Louisville coach Scott Satterfield argues with an official over a call during the second half of the team's NCAA college football game against Clemson in Louisville, Ky., Saturday, Nov. 6, 2021. The Cardinals face Air Force on Tuesday, Dec. 28, 2021, in the First Responder Bowl. (AP Photo/Timothy D. Easley, File)

DALLAS (AP) — Louisville coach Scott Satterfield is having flashbacks to his days as a player and coach in the Southern Conference and the triple-option teams there. None of those likely ran that offense as well as Air Force does.

Air Force, which the Cardinals face Tuesday in the First Responder Bowl, is the nation's top rushing team for the second season in a row at nearly 341 yards per game. The Falcons didn't even throw a pass in their last game against UNLV after three earlier wins when they completed only one pass in each each.

“I'm glad not many teams run it. ... They do an outstanding job with it. Fortunately, we’ve had 2 1/2 weeks to prepare for it,” said Satterfield, the former Appalachian State quarterback and coach. “It does bring back memories of the old SoCon where several teams would run that, and they were always very successful. And we know Air Force is been extremely successful too now."

Brad Roberts is the Mountain West rushing leader with 106.2 yards per game and seven 100-yard games, and is the first Air Force fullback with a 1,000-yard season since Rodney Lewis in 1989. The Falcons have six players with multiple rushing TDs and four with at least 45 yards per game, including quarterback Haaziq Daniels (702 yards, nine TDs rushing).

Louisville (6-6) has dual-threat junior quarterback Malik Cunningham, who has already said he is returning for his senior season.

"We just know we (need to) get the ball out of his hands. He’s very dynamic with the ball," Air Force safety Corvan Taylor said.

“Tremendous player. You think back over the years, the guys that they’ve had, most recently obviously with Lamar Jackson,” Air Force coach Troy Calhoun said. “And now to have a guy that there are some similar attributes, and in some other areas, certainly where he has his own talents too.”

Satterfield knows the Cardinals will have to take full advantage when they do have the ball. Air Force averages nearly 37 minutes of possession a game.

“We’ve got to get off the field on the defensive side side,” Satterfield said. “Offensively, we’re going to be limited in possessions, limiting in plays. We’re going to have to find ways to score touchdowns and don’t want settle for field goals. So we’ve got to be a little bit more aggressive.”

Air Force will try to reach 10 wins for the fourth time in 10 seasons. The Falcons, whose three losses are by a combined 17 points, won 10 games only five times in the program’s first 57 seasons before that. The Falcons are 13-13-1 in bowl games, 5-5 in Calhoun's 15 seasons.

Louisville has to win to avoid consecutive losing seasons for the first time since 2008-09.

Air Force has 35 sacks this season, its most since 37 in 2015. The Falcons are led by linebacker Vince Sanford's 9 1/2 sacks. The 31 sacks by the Cardinals are their most since 2016, with linebacker Yasir Abdullah is second in the ACC with nine.

The Cardinals will be without receivers Jordan Watkins and Justin Marshall, both starters this season who entered the transfer portal. The Cardinals still have Marshon Ford, who led the team with 47 catches for 530 yards. Tyler Harrell has a team-high five receiving TDs while averaging 31.6 yards (443 overall) on his 14 catches.