Louisville, Ole Miss look to light up scoreboard in opener 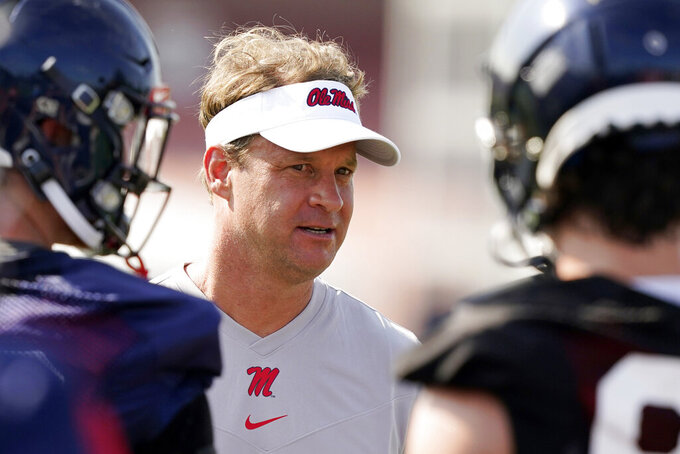 Considering the eye-popping numbers Louisville and Mississippi put up last season, it wouldn’t be shocking if a shootout erupted when the schools face off in Atlanta.

But despite all the attention the teams' offenses generate, their defenses could be the difference in the game if one is able to control tempo and create turnovers.

That’s certainly the focus for Ole Miss in Monday night’s Chick-Fil-A Kickoff game that wraps up college football’s first full weekend. After ranking next to last in FBS total defense in 2020 (519 yards allowed per game), the Rebels are determined to be stingier — a must if they want to avoid canceling out the gains by their high-octane offense.

“Just having a whole year under coach (D.J.) Durkin and coach (Chris) Partridge, the defense is real comfortable and just ready to go out there and execute,” Ole Miss senior defensive back Otis Reese said of the coordinators’ system.

“I just believe that in a big-time game the focus has got to be there, and the little things are going to take care of the big things.”

Ole Miss will have to figure it out without second-year coach Lane Kiffin, who tested positive on Saturday with a breakthrough case of COVID-19. He will not travel to Atlanta with the Rebels.

Both defenses will be challenged in the primetime matchup of Atlantic Coast and Southeastern Conference schools featuring two of the game’s most dynamic quarterbacks.

The Cardinals defense, considered porous not long ago, has steadily improved under the 3-4 scheme of coordinator Bryan Brown. Louisville ranked 39th nationally last season despite finishing 4-7. There's plenty of room for growth, and they relish the chance to continue proving themselves before a national audience.

“Having that challenge right away, I like it,” Louisville safety Kendrick Duncan said.

Louisville counters offensively with junior QB Malik Cunningham, who’s eager to build on career highs of 2,617 yards passing and 609 rushing with 27 combined touchdowns. Even with many of his top targets gone, Cunningham’s mobility still poses a threat the Rebels must contain to swing a potential back-and-forth game in their favor.

Asked what kind of pressure Cunningham creates, Kiffin said, “Well, a lot, because they throw the ball really well and then (he) takes off and runs.

“In a perfect world you want unathletic quarterbacks to play against, so when you cover people, they can’t bring another dimension.”

Some other things to watch in the inaugural meeting between Ole Miss and Louisville:

Corral, who has been mentioned as a potential Heisman Trophy candidate, and Cunningham each look to reduce the turnovers that hurt them last year. Corral threw 14 interceptions, including in road games against Arkansas and LSU. Cunningham tossed 12 with several fumbles, leading him to focus on improving his poise and pocket presence to get a better read on coverage before throwing or running.

“Staying in the pocket just gives you a little bit more time to see how everything is going,” Cunningham said. “I kind of like it back there.”

Both schools enter seeking an improved pass rush over last season. Ole Miss ranked 98th with just 16 sacks, while Louisville was 25 spots higher with 22. Players acknowledged they should’ve more had more, an area coaches have emphasized in fall camp.

“You have to put them in situations where it’s a little bit more dropped back, so they do hold the ball a little bit longer,” Louisville coach Scott Satterfield said. “That’s where you can create some pressure.”

Rebels running back Jerrion Ealy (745 yards, nine TDs) returns to lead the SEC's top rushing attack last season. Corral added 506 yards and four scores. Ealy, a preseason All-SEC pick as an all-purpose player, wants a little more attention to his ability as a runner. Seeking a featured back to take the load off Cunningham, Louisville looks to redshirt freshman Jalen Mitchell and Hassan Hall, who combined for 570 yards and four TDs.

Ole Miss is replacing one of the nation’s most prolific receivers with Elijah Moore gone to the NFL. That leaves Dontario Drummond, Braylon Sanders and Jonathan Mingo to fill the void. Converted QB John Rhys Plumlee is also at receiver while Ealy and Henry Parrish have seen practice snaps lined up outside.

Louisville is making its second appearance in the Chick-Fil-A Kickoff, seeking a better result than its 31-24 loss to Auburn in 2015. That game marked the debut of future Heisman Trophy winner Lamar Jackson, who lined up behind QB Reggie Bonnafon but took the first snap and threw an interception leading to the Tigers' first TD. By game’s end he was behind center and eventually the Cardinals’ regular QB. Jackson became Louisville’s first Heisman winner the next season.