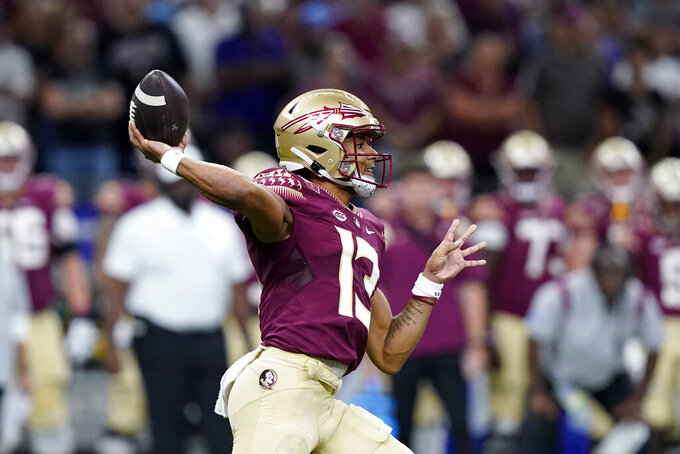 Line: Florida State by 2 1/2, according to FanDuel.com Sportsbook.

Florida State is playing for the first time since escaping LSU 24-23 on Sept. 4 with a blocked extra point with no time left. The Seminoles aim to break a two-game slide against the Cardinals, who return home after holding off UCF 20-14. Louisville seeks its first Atlantic Coast Conference win two weeks after losing at Syracuse in the opener.

Louisville QB Malik Cunningham vs. FSU secondary. The mobile Cunningham rebounded from a rough outing at Syracuse with 313 yards from scrimmage at UCF, including a 43-yard touchdown run. He has passed for 8,441 of his 11,215 total yards and 62 of his 101 TDs but faces a Seminoles unit that returned every defensive backfield starter. The Seminoles rank second in the ACC in pass defense, allowing 140 yards per game.

Louisville S Kenderick Duncan posted a career-best 13 tackles with 10 solos at UCF and is one of the Cardinals' best defenders. The Georgia Southern transfer has made 93 stops in 15 starts, including 76 last season.

The Seminoles are allowing an ACC-low 0.50 sacks per game, which is tied for 14th nationally. ... Six players have rushed for FSU's seven TDs, including linebacker DJ Lundy, who lined up at fullback and ran for a 1-yard score against LSU. ... Louisville is playing its second consecutive Friday night game. ... Cardinals TE Marshon Ford has caught a pass in 26 consecutive games. ... Louisville will retire Michael Bush’s No. 19 jersey during the game. He’s eighth all time with 2,508 yards rushing and third with 39 TDs.