LSU freshman cornerback Stingley will be tested vs Oklahoma 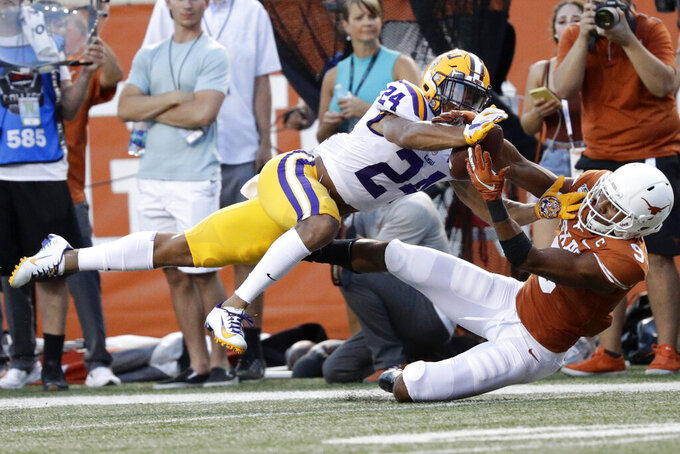 Derek Stingley Jr. sat flanked by the Heisman Trophy favorite and LSU coach Ed Orgeron, as usual the youngster in the group.

Quarterback Joe Burrow even felt compelled to offer a reminder about the Tigers cornerback after both had starring roles in the Southeastern Conference championship game.

Stingley quickly progressed from top recruit to a centerpiece of the top-ranked Tigers'defense. He had two interceptions in the title game win over Georgia in Atlanta, setting up a playoff semifinal showdown with Jalen Hurts and No. 4 Oklahoma.

That earned a trip to the interview room for a freshman who had been off-limits to the media this season. He handled that about as well as he has his on-field role, saying “the only reason I’m in this position is because of everyone else on the defense.”

Stingley has started all 13 games for the Tigers. He leads the SEC and is tied for fifth nationally with six interceptions. He's third nationally with 21 passes defended and also returns punts.

The 6-foot-1, 195-pounder arrived at LSU from Dunham School in Baton Rouge as the nation’s No. 1 overall recruit, according to Rivals.

But Stingley made a quick impression on his teammates with his approach, beyond that rating.

“Derek is as humble a guy as I've seen,” Burrow said. “No. 1 recruit, sometimes they come in, and they're all cocky and loud, and Derek didn't say a word for three months.

“At practice, I would go out of my way to throw Derek's way to see if he was as good as everyone said he was. I can tell you, yes, he is. Yes, he is.”

Orgeron recalls seeing Stingley and his dad, Derek Sr., working out in the indoor facility “every Saturday and Sunday” during the offseason. The work paid off with a starting role in a secondary already featuring Delpit and fellow cornerback Kristian Fulton, along with the punt return role.

“He's a tireless worker,” Orgeron said. “Derek is a humble young man. He came ready to go when we had him. His dad did a good job of coaching him. He's one of the finest corners I've ever been around, and he's a competitor.”

Stingley also has impressive athletic bloodlines. Derek Stingley Sr. — now an assistant at The Dunham School — played baseball at Triton College and was drafted by the Philadelphia Phillies in 1993.

His late grandfather, Darryl Stingley, was a first-round draft pick by the New England Patriots 20 years earlier. Darryl Stingley was paralyzed during a 1978 preseason game when he was hit by the Raiders’ Jack Tatum.

The younger Stingley’s career is certainly off to a good start. Even in LSU's spring game, he picked off a deep pass from Burrow.

For all the highlights, like any cornerback, he’s had to overcome some bad plays, too.

Against Alabama, he was caught frozen at the line while DeVonta Smith raced by him and caught a 64-yard touchdown pass. Stingley was glancing toward the sideline when Tua Tagovailoa, who had taken a snap immediately after making it look as if he was looking to his own coaches for a new play.

Cornerback Kristian Fulton describes Stingley as “a freshman that has gone through adversity.”

“He made plays but he also went through some adversity,” the LSU senior said. “That’s something you don’t really see from a freshman. He’s strong mentally. Great athleticism. I couldn’t be prouder of him. He’s a complete player.”

Stingley has had the benefit of working against Burrow and LSU’s standout receivers like JaMarr Chase, Justin Jefferson and Terrace Marshall in practice. It’s not a bad way to groom yourself for the likes of Burrow’s fellow Heisman finalist Oklahoma's Hurts and his star receiver CeeDee Lamb.

“Joe taught me a lot about having to go play by play because in high school I was always able to make the play,” Stingley said. “But when I came and he was pinpoint accuracy, there was just times that I was on the receiver but I just couldn't do anything about it.

“That just taught me a lot about the game because it's going to happen. Once I got over that, like play-by-play mentality, then I knew that I'd be all right.”