March Madness in one place? NCAA looking at Indianapolis 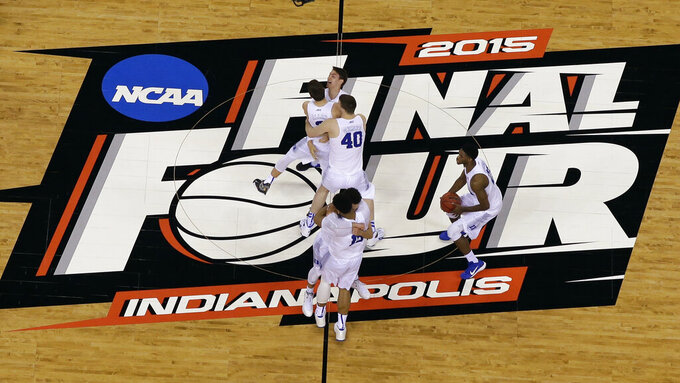 FILE - Duke players celebrate after the NCAA Final Four college basketball tournament championship game against Wisconsin in Indianapolis, in this Monday, April 6, 2015, file photo. The NCAA announced Monday, Nov. 16, 2020, it plans to hold the entire 2021 men’s college basketball tournament in one geographic location to mitigate the risks of COVID-19 and is in talks with Indianapolis to be the host city (AP Photo/David J. Phillip, File)

The University of Maryland-Baltimore County pulled off one of the greatest upsets in American sports history at the 2018 NCAA Tournament, knocking off Virginia to become the first No. 16 seed to beat a No. 1.

The madness kept coming that March from Pittsburgh to San Diego. Top-ranked Xavier lost in the second round and so did No. 2 seeds North Carolina and Cincinnati. Two third-seeded teams were bounced early, as were three No. 4 seeds during an opening weekend that epitomized the beloved spectacle the NCAA Tournament has become.

That coast-to-coast excitement won’t happen this season: The NCAA announced on Monday it plans to hold the entire 2021 men's tournament in a single geographic area to mitigate the risks of COVID-19. It is in talks with Indianapolis to serve as the host city.

Instead of all those upsets, buzzer beaters and star-turning performances being spread out at venues across the country, the bracket will be played out at sites in one city, a sort of one-stop shopping version of the tournament typically played in every region of the U.S.

The news comes nine months after the coronavirus pandemic led to the cancellation of the 2020 tournaments, a severe economic blow not just to the host cities but scores of athletic departments across the country.

“It will be a very controlled environment,” NCAA senior vice president of basketball Dan Gavitt said. “It’ll be different, it’ll be historic and it’ll be hopefully something we all treasure and experience just once, hopefully not ever again.”

There was no immediate word on the women's tournament, which runs concurrently in March and early April.

The pandemic has disrupted every sport for months now. The NBA and NHL completed their seasons in controlled-environment bubbles and baseball trimmed its regular season to 60 games with a World Series played entirely in Texas and no home games for the LA Dodgers or Tampa Bay. The NFL has forged ahead with its regular season, though with dozens of positive COVID-19 tests.

The original plan was for the 67 games of the 2021 NCAA Tournament to be played at 13 sites across the country, starting with the First Four in Dayton, Ohio. Regional sites were set for Minneapolis, Denver, New York City and Memphis, Tennessee.

As COVID-19 cases across the country spiked and wreaked havoc on the college football season, it became clear to the NCAA Division I Men's Basketball Committee that multiple sites would not work.

“We coalesced around a decision that we were not going to be able to host the tournament through 13 different sites,” Kentucky athletic director and committee chair Mitch Barnhart said. “Through the pandemic, it was unreasonable to expect that.”

Centralizing the tournament will allow a controlled environment with venues, practice facilities, lodging and medical resources all near one another. Indianapolis, the only city the NCAA is currently negotiating with, made the most sense since the Final Four was already scheduled there for April and NCAA headquarters is on the edge of downtown, walkable from various sites.

The NCAA set a Nov. 25 start date for the season as it tries to bounce back after the cancellation of the 2020 NCAA Tournament led to a $375 million shortfall in revenue distributed to member institutions.

Schools have scrambled to fill schedules while the coronavirus has ripped through college football, causing the cancellation of more than 60 games. Multiple basketball programs are currently on pause due to COVID-19 and the Ivy League announced last week the cancellation of winter sports, including men’s and women’s basketball.

Gavitt said there is no plan to change the start date and the NCAA Tournament is expected to be played in March and April as scheduled. No determination has been made on whether fans will be allowed, a decision that will also face individual conferences as their tournaments approach in March.

“The committee has made a really sound decision here, disappointing as it is to go away from our valued hosts for 13 different sites from First Four through the regionals,” Gavitt said. "Condensing this to one geographic area that we can do it in a more safe and responsible way is where we need to be.”

It might be a while before the women’s basketball committee decides what it wants to do with the tournament. Since 2015, the first two rounds have been played on home campuses of the top 16 seeds. Those aren’t known until Selection Monday, so there are no predetermined sites.

The women’s Final Four next March is set for San Antonio and the regionals are supposed to be played in Albany, New York; Austin, Texas; Cincinnati; and Spokane, Washington.

“Because of the ongoing pandemic, the committee recognizes that the tournament may have a different feel,” NCAA vice president of women's basketball Lynn Holzman said. “The committee intends to maintain a field of 64 teams and a variety contingency plans — including reducing the number of first- and second-round sites or bringing the entire tournament to one location — are being considered."

A one-site NCAA Tournament will cause a financial hit to the cities scheduled to host early-round and regional games.

Dayton, the tournament's tipping off point the past 19 years, generates an estimated $4 million annually from the tournament and Raleigh, North Carolina, typically pulls in about $5 million for early-round games. Bigger cities, particularly those hosting regional sites, earn substantially more.

The change to a one-site tournament will cost North Carolina opening-round games for the third time in five years. Greensboro was replaced as a host site in 2017 due to passage of a law limiting protections for people in the LGBT community and had games wiped out last spring by the pandemic.

“From a statewide perspective, and then for these last two years, it’s just sort of a feeling of helplessness, because there’s really nothing we could do about it," said Scott Dupree, executive director of the Greater Raleigh Sports Alliance. “And no one’s blaming the NCAA at all. I feel like this is probably – well, this is – the right thing to do. It’s just very unfortunate and it’s disappointing, but I feel like they’re making the right move.”