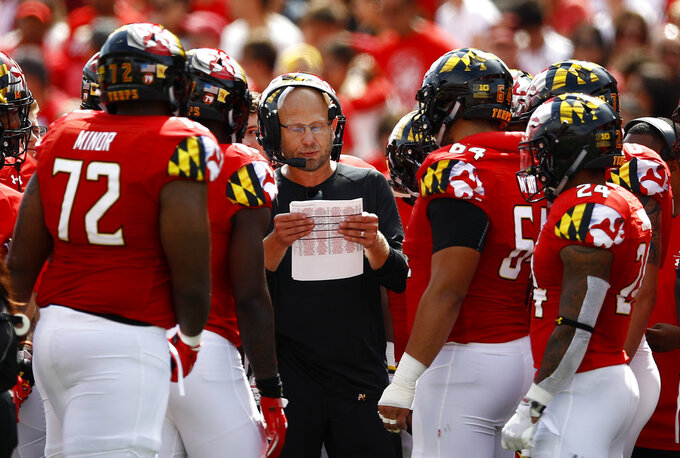 FILE - In this Saturday, Sept. 22, 2018, file photo, Maryland interim head coach Matt Canada, center, huddles with players in the first half of an NCAA college football game against Minnesota,, in College Park, Md. Playing the dual role of interim coach and offensive coordinator, Canada has kept the Terrapins (3-2, 1-1) in contention for a bowl bid during a season dedicated to fallen teammate Jordan McNair. (AP Photo/Patrick Semansky, File)

COLLEGE PARK, Md. (AP) — Matt Canada expects this to be a "special" homecoming for Maryland, for reasons that extend beyond what happens on the field in a matchup with Rutgers.

Playing the dual role of interim coach and offensive coordinator, Canada has kept the Terrapins (3-2, 1-1 Big Ten) in contention for a bowl bid during a season dedicated to fallen teammate Jordan McNair.

McNair died of heatstroke, two weeks after he collapsed on the field during a workout on May 29. Coach DJ Durkin has been on administrative leave since August while the school investigates the culture of the football program.

The team still has managed to forge a winning record — a feat Canada hopes will be acknowledged by those in attendance Saturday.

"It's a special time. We've got some former players that are going to come back and obviously alumni coming back. This is their campus, their school," Canada said. "We are going through a grieving process, and a lot of our students have been amazing to our players. I'm sure a lot of the alumni that come back are going to be appreciative of how the players have handled the adversity."

The determination displayed by players means more to Canada than wins over ranked Texas, Bowling Green and Minnesota. It also makes it easier to put losses to Temple and Michigan in perspective.

The Terps need three more victories to become bowl eligible. With a difficult schedule ahead, Maryland can't afford to slip against struggling Scarlet Knights (1-5, 0-3), who are coming off a 38-17 loss to Illinois.

Rutgers beat Maryland last year, but the Terrapins have a new look with Canada running the offense.

"Matt Canada has done a really nice job holding that team together and getting to this point," Rutgers coach Chris Ash said. 'It's a completely different style of offense than Maryland has had in the past or what we've faced. It's a run-first offense. That's what they do."

Some other things to know about the Rutgers-Maryland game:

Rutgers is ranked 109th nationally in points allowed. Opponents are averaging more than 36 points and the Scarlet Knights have surrendered 2,607 yards.

The big play has hurt. Opponents have scored on 13 plays of 38 yards or more, and that doesn't include the three interceptions thrown by freshman Art Sitkowski that have been returned for touchdowns.

Maryland senior linebacker Tre Watson will miss the first half after being ejected in the third quarter against Michigan last week for targeting.

Watson had nine solo tackles against the Wolverines before being ousted.

Rutgers graduate transfer Jonathan Hilliman has run for five touchdowns this season and has a team-high 30 points.

The five TDs are tied for fourth in the Big Ten. He also has gained 17 first downs rushing and has converted four of five fourth-down runs.

Terps running back Ty Johnson hurt his knee against Michigan, but the injury wasn't serious and he's looking to extend his success against Rutgers.

The senior has run for 296 yards and three touchdowns in three games against the Scarlet Knights, averaging 12.9 yards per carry.

This year, he's averaging 6.7 yards on 45 attempts and last week returned a kickoff 98 yards for a TD.

Rutgers vs. Maryland has the makings of a rivalry, but it's not quite there yet.

"Both Rutgers and Maryland are obviously close in proximity," Ash said, "but relatively new to playing each other and being in the Big Ten."