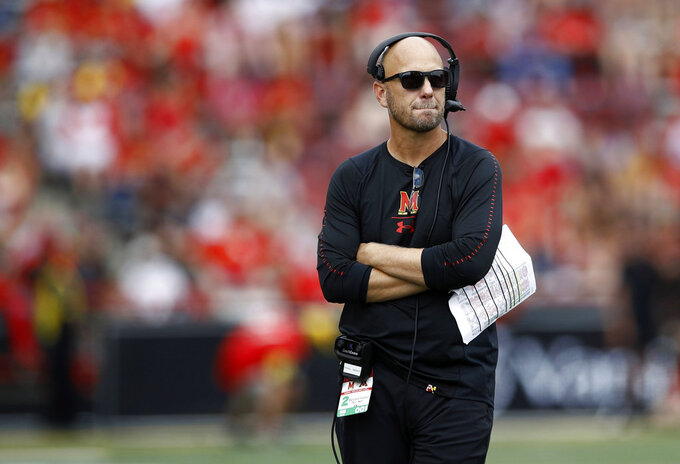 FILE - In this Sept. 22, 2018, file photo, Maryland interim coach Matt Canada stands on the field during a timeout in the second half of the team's NCAA college football game against Minnesota in College Park, Md. Canada knows it’s going to be a challenge to pull off the upset against No. 9 Ohio State on Saturday, but hopes his team appreciates the opportunity. (AP Photo/Patrick Semansky, File)

COLLEGE PARK, Md. (AP) — Ohio State coach Urban Meyer hates having to defend the performance of his ninth-ranked Buckeyes, who still have a shot at winning the Big Ten and the national championship heading into Saturday's game at Maryland.

Meyer bristles at those who claim this team has underachieved. Yet, he understands that this is what happens when greatness is the norm.

"What happened? What's the problem? What about this? What about that?" Meyer said, mimicking the doubters. "I could stand up and say, 'What are you guys talking about?' But I get it. I don't think we played great either at times."

Ohio State lost to Purdue 49-20 on Oct. 20, then squeezed past Nebraska at home before using a 17-point fourth quarter to pull away from the Spartans.

"It was a great team win," Meyer said. "But we're not where I would like us to be. Is that fair?"

There's still time to get it right. A win over Maryland (5-5, 3-4) and another next week against Michigan will put the Buckeyes in the Big Ten title game.

Terrapins interim coach Matt Canada knows it's going to be a challenge to pull off the upset, but hopes his team appreciates the opportunity.

Some other things to know about the Ohio State-Maryland matchup:

Meyer insists the Buckeyes are preparing for Maryland aren't looking down the road to the showdown with Michigan that will determine the winner of the Big Ten East.

"I had a chat with them," Meyer said. "I think (Maryland) is one of the more talented teams in the Big Ten. They beat Texas early on. They are extremely good.

"Our guys watched film," he said. "Our guys are very intelligent players here. I do worry about staring at phones all day long. But they know what's in store. And I can assure you (there) is focus on going to win that game at noon."

Maryland's seniors play their final home game, ending careers in which most played for head coaches Randy Edsall and DJ Durkin, along with interim coaches Canada and Mike Locksley.

They also banded to keep the team together after the death of teammate Jordan McNair, who collapsed on the practice field in May and died of heatstroke in June.

"Really, really proud of them and the leadership they've shown this year," said Canada, hired in January to be offensive coordinator. "Excited for their families and them to be honored Saturday. Hopefully a lot of people get here early enough to do that, because those kids deserve to be honored and appreciated for what they've given to the program."

Meyer finally put in dual-threat backup quarterback Tate Martell three times against Michigan State in some red-zone situations. His first play was a 5-yard quarterback draw that got down to the 1, and he stayed in to hand off to Mike Weber for the touchdown plunge.

Meyer said there could be more Martell in short-yardage situations that in recent years were nearly automatic when J.T. Barrett was running the offense.

A season-ending knee injury to quarterback Kasim Hill in last week's loss to Indiana means Tyrrell Pigrome will start for Maryland, which needs one victory in its final two games to become bowl eligible.

Pigrome went 10 for 13 for 146 yards and a touchdown against the Hoosiers before losing a fumble in the closing seconds.

The Buckeyes are gunning for their seventh consecutive 10-win season and 14th since 2000. ... Maryland's Anthony McFarland ran for 210 yards against Indiana, a school record for a freshman. ... Ohio State is 4-0 against Maryland, scoring 52, 49, 62 and 62 points in blowout fashion.