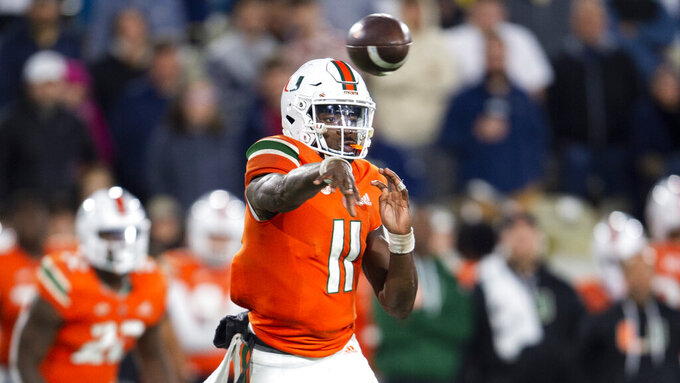 CLEMSON, S.C. (AP) — Mario Cristobal wants to put Miami at the top of the ACC, where Clemson currently is. He will get his first chance as Hurricanes coach to see the ninth-ranked Tigers up close — and how far they'll have to travel to get there — this weekend.

Clemson (9-1, 7-0 Atlantic Coast Conference) hosts Miami (5-5, 3-3) on Saturday as it tries to finish off a fourth perfect regular season in league play since 2015. The Tigers are returning to the ACC title game next month for the seventh time in eight seasons, a run of dominance that harkens back to Cristobal's days as a player at “The U,” when he was part of national championship teams in 1989 and 1991.

Cristobal was an assistant at Nick Saban's Alabama when the Crimson Tide split a pair of national championship games with the Tigers — Alabama winning after the 2015 season and Clemson the rematch a year later.

“I’ve seen them up close and personal as an assistant coach at the University of Alabama,” Cristobal said. “And when those two teams played, it’s almost like mirror images of each other. So, culture certainly shows up and not in only caliber of play but making plays, the way you play the game, and they play the game the right way.”

Miami wasn't too far off from Clemson in the rankings when the season began, moving up to 13th after starting 2-0. Three consecutive losses have left the Hurricanes needing a victory over the final two weeks to reach a bowl game.

Nothing, Orhorhoro says, is guaranteed without putting in the work at practice and having the right mindset all week.

“It is college football,” he said. “Anybody can beat anybody on any given day.”

Clemson is chasing its 40th straight home win, extending its ACC record set earlier this year. The Tigers have not lost at Death Valley since Nov. 12, 2016, when Pittsburgh defeated No. 3 Clemson 43-42 on a last-second field goal. A win over Miami would tie the Tigers with Notre Dame's 40 straight at home from 1907-18.

Every indication is that Jacurri Brown, who started at quarterback in Miami’s win over Georgia Tech last weekend, is in line to get the call again Saturday. Starting quarterback Tyler Van Dyke is trying to get back on the field this season, but an injury in the shoulder area has already knocked him from the lineup twice and his status remains a mystery.

Clemson has had its own quarterback concerns this season. However, starter DJ Uiagalelei had a solid showing (he threw for a score and ran for a second) in the victory over Louisville last week. Coach Dabo Swinney and offensive coordinator Brandon Streeter have talked about finding playing time for backup Cade Klubnik, who played one series in the fourth quarter with Clemson ahead 24-10.

Clemson coach Dabo Swinney said Miami has the pieces to get back in the thick of big time college football. The Hurricanes' only ACC Coastal title came in 2017 where they lost the championship game to Clemson, 38-3.

In Cristobal's first year, Swinney's sees top-line recruiting and an athletic director who knows what it takes to succeed in Dan Radakovich (Clemson's AD from 2012-2021).

“You see the progress of what they're trying to build,” Swinney said of Miami.

Clemson is 34-14 all time against ACC Coastal opponents. After Miami, the Tigers have one more Coastal team left in division champion North Carolina in the league title game next month. The ACC will scrap divisions for the 2023 season. Miami is 19-23 against ACC Atlantic teams with only Clemson remaining.