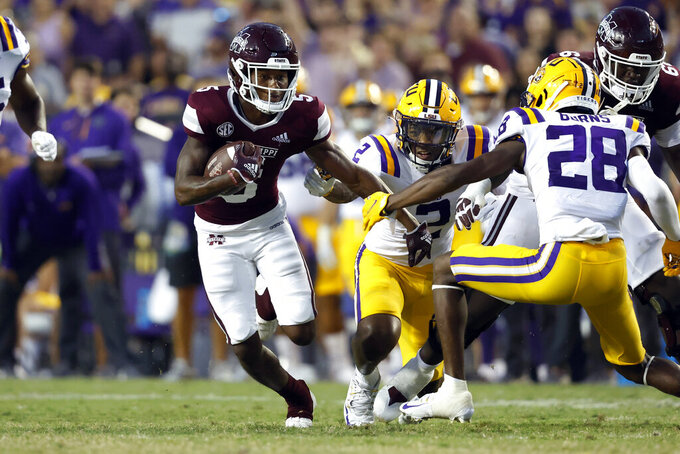 Line: Mississippi State by 30 1/2, according to FanDuel.com Sportsbook.

Mississippi State looks to bounce back from its 31-16 loss at LSU in which it surrendered 21 straight points in the fourth quarter. Bowling Green seeks to follow up its 34-31 overtime win over Marshall, which upset then-No. 8 Notre Dame the previous week.

Bowling Green QB Matt McDonald vs. Mississippi State QB Will Rogers. They’re obviously not going head to head, but the game figures to be a passing contest with both tied for fourth nationally with 10 touchdowns each. McDonald has tossed at least four TDs in two straight games, including a career-best five against Eastern Kentucky in a 59-57 seven-overtime loss. Rogers leads the nation with nearly 34 completions per game and is sixth with almost 326 yards per game. He seeks to rebound from a 214-yard outing at LSU that marked his lowest total since his freshman season.

Bowling Green: LB JB Brown has made his presence felt all over the field for the Falcons. He’s second on the team with 19 total tackles (15 solo), including 2.5 for loss and a sack. Brown is also tied for third nationally with two forced fumbles. The Falcons rank seventh nationally with 12 sacks, and 10 players have at least a half a sack.

Mississippi State: WR Rara Thomas is close to surpassing his freshman numbers while leading the Bulldogs receiving corps. He has 14 catches for a team-high 211 yards (10th in the SEC) with two TDs. He caught 18 passes for 252 yards and five TDs last season. Thomas is averaging 15.1 yards per catch and has seven TDs in his past eight contests.

Bowling Green is facing a SEC opponent in consecutive seasons for the first time since playing Florida and Mississippi State in 2012-13. ... BGSU is 4-9 against the SEC. ... MSU managed just 289 yards against LSU, 214 passing. ... Bulldogs WR Austin Williams has played in a school-record 53 games and is tied for sixth all-time with 14 TD catches. ... MSU will honor Frank Dowsing Jr. and Robert Bell as its first African-American varsity players on the 50th anniversary of when they last dressed for the Bulldogs.