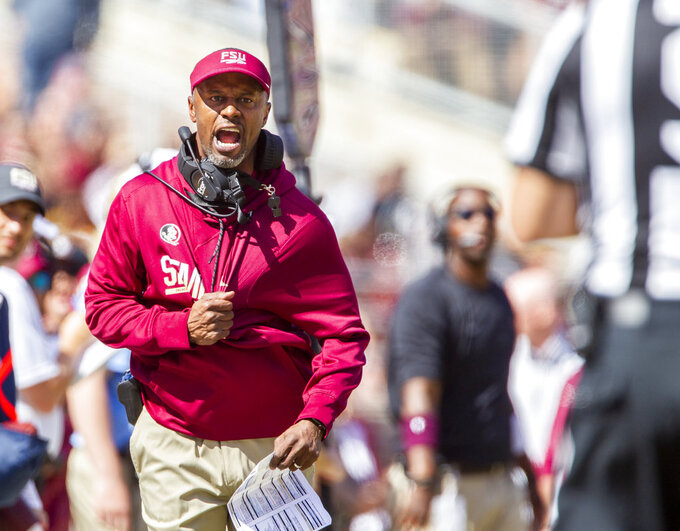 Then there were the punches, a different kind of black eye in what has been a frustrating season for the Seminoles.

Two suspended players — receiver Nyqwan Murray and linebacker Zaquandre White — will sit out the first half at North Carolina State on Saturday after throwing punches at Clemson players in separate incidents during last weekend's humbling 59-10 loss to the Tigers.

And then there was the quitting, which Taggart said was isolated to just a "handful" of players. Without mentioning specific players who he felt threw in the towel against Clemson, Taggart clearly was disappointed with how his team performed during the blowout.

"Our entire football team needs to understand exactly what we mean about quitting, what we mean about competing and what the standard is here at Florida State when we go out there on the football field and play," Taggart said. "It's going to be that way, no ifs, ands or buts about it, and we're going to hold everyone accountable, players and coaches, to live up to that standard."

Florida State (4-4, 2-4 Atlantic Coast Conference) has set a standard of winning and playing in bowl games — from Bobby Bowden to Jimbo Fisher. The Seminoles' last losing season was Bowden's first year, 1976, and they have played in a bowl game each year since 1982.

Those two streaks are in jeopardy.

After Florida State plays at NC State (5-2, 2-2), the Seminoles finish at No. 3 Notre Dame before returning home to face No. 24 Boston College and No. 13 Florida. Florida State is one of just three schools who face three ranked teams to conclude the regular season.

To extend the streaks, the Seminoles can't afford any half-hearted efforts and must steal a win over a ranked team, which recently they haven't been able to do. Florida State is 0-5 against ranked programs since the start of the 2017 season.

In three games this season against ranked teams, the Seminoles were rocked by Clemson, lost 24-3 to Virginia Tech and allowed Miami to rally from a 20-point deficit to take a 28-27 win.

Still, Florida State players and coaches are optimistic about the progress that they have made even though the loss to second-ranked Clemson was the worst at home in program history.

"There's two ways of looking at it: You can look at that thing as a complete failure, which in many ways it was," offensive coordinator Walt Bell said. "That's what we're ultimately there to do, is go win the game and we failed to do that. Whether it was 31-30 or 100-0, it's all a failure. Nobody feels good about losing a football game. Or you can look at it as it's a great learning experience."

If there are lessons to be learned, Taggart wants the Seminoles to play with pride and limit mistakes. Florida State is 107th in the FBS in turnover margin (17 turnovers vs. 11 takeaways) and 111th in penalties (72.4 yards per game).

"We've just got to come in here, work hard when things aren't going good," receiver D.J. Matthews said. "We just have to fight the battles."

Injury update: Taggart said Monday that Deondre Francois remains day-to-day but the starting quarterback did not throw during the open portion of practice on Tuesday. Sophomore James Blackman, who started 12 games in 2017 when Francois was injured, took all of the first-team reps in practice. Defensive tackle Robert Cooper and tight end Naseir Upshur have also been ruled out for Saturday.