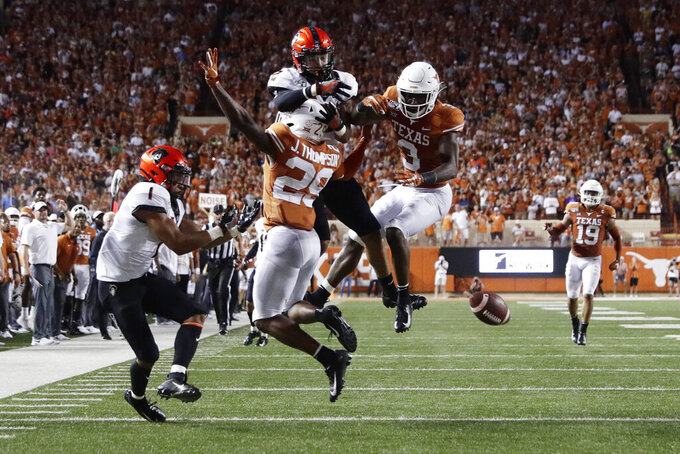 AUSTIN, Texas (AP) — The injury news keeps getting worse for No. 11 Texas and its defense.

Coach Tom Herman said Monday the Longhorns have lost two more starters in the secondary for several weeks after getting hurt in a conference-opening win over Oklahoma State: All-Big 12 safety Caden Sterns, the team's leading tackler, is expected to miss the next four weeks with a knee ligament sprain. Cornerback Jalen Green is expected to miss at least that much time with a dislocated shoulder.

Another defensive back, Josh Thompson, is out indefinitely with a broken foot and linebacker Marcus Tillman Jr., will miss the rest of the season with a knee ligament sprain.

Texas (3-1, 1-0) is already struggling against the pass. The Longhorns rank No. 100 nationally in pass efficiency defense and No. 96 overall in third down defense.

The Longhorns are off this week before traveling to West Virginia on Oct. 5. They play No. 6 Oklahoma, which has one of the top passing offenses in the country, on Oct. 12.