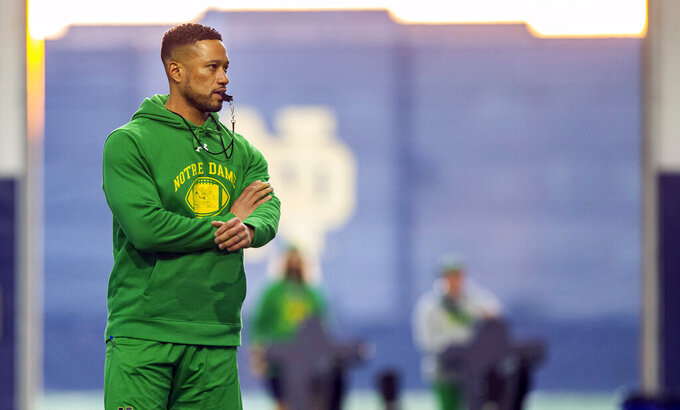 SOUTH BEND, Ind. (AP) — A third of the way into his first spring practice as Notre Dame coach, 36-year-old Marcus Freeman likes what he is seeing from the Fighting Irish.

“I love the way they are flying around,” Freeman said Saturday following the fifth of 14 practices ahead of the annual spring game April 23.

Notre Dame is coming off an 11-2 season and No. 8 ranking in the final Associated Press Top 25 rankings.

“I love what are offense is doing trying to establish the run game and the play-action pass – they are so multiple,” Freeman said. “Defensively, we’re doing a lot of different things. I think our kids are grasping what our coordinators are doing on both sides of the ball.”

It’s been a whirlwind couple of months for the first-time head coach who was elevated from defensive coordinator to head coach shortly after Brian Kelly surprised Notre Dame by taking the head job at LSU on Nov. 30. Freeman’s first game in charge was a 37-35 loss to Oklahoma State in the Fiesta Bowl after which he spent time on the road recruiting.

In the 75 days between the end of the 2021 season and the first day of spring drills, the returning players and 12 incoming freshmen have become acquainted with eight new members of the coaching staff.

Among them Al Golden, Freeman’s successor at defensive coordinator and linebackers coach who arrived days after directing the Cincinnati Bengals’ linebackers in their 23-20 Super Bowl LVI loss to the Los Angeles Rams on Feb. 13.

“My buddies in coaching are like, ‘You’re on Week 32 now.’ The season just kept going,” joked the 52-year-old Golden, whose spent 10 years as a head coach at Temple and Miami. “There will be a break here soon, but right now we’re pushing, and the kids are responding.”

Golden likes what he sees from several returnees, including 6-foot-5, 260-pound senior hybrid end Isaiah Foskey, who had 11 sacks last season All of Golden’s linebackers, led by J.D. Bertrand, Jack Kiser and Bo Bauer, are being asked to learn multiple positions.

“That’s going to make us strong in the long term and it helps them develop a conceptual mindset of what’s going on around them, which is important,” Golden said.

His new charges like what Golden brings to the table.

“You can tell (Golden’s) been around the game a long time – he knows what he’s doing,” said 6-foot-2¼, 229-pound senior linebacker Marist Liufau, who missed last season with a broken leg. Bertrand stepped in and led the team with 101 tackles despite playing with an injured wrist that required postseason surgery.

Golden likes all the things Liafau can do and he sees some of the same versatility in another native Hawaiian, 6-foot-2½, 245-pound junior Jordan Botelho.

The coaching staff turnover was considerable on the offensive side of the ball.

Rees has free rein to run the offense but he needs a new starting quarterback to replace Jack Coan (3,150 passing yards and 25 touchdowns with a 65.5% completion percentage). Sophomore Tyler Buchner and junior Drew Pyne both have three years of eligibility remaining and valuable playing experience from 2021.

Buchner ran for 336 yards and three TDs and the two combined for more than 500 yards and five touchdowns passing, and Rees believes both are good leaders.

“Drew’s always had that — he has that energy that people gravitate to,” Rees said. “Tyler has it in him. He’s ultra-competitive. They are both hungry and eager to get better and learn.”

The Irish need to replace all-purpose running back Kyren Williams. Chris Tyree, Logan Diggs and Audric Estime will carry the load behind an offensive line being rebuilt by a familiar face: 63-year-old Harry Hiestand, who mentored four first-round NFL draft picks during his previous stint (2012-17) under Kelly.