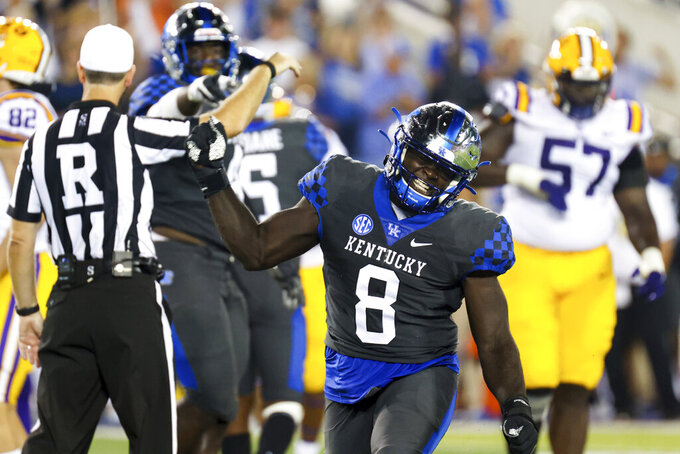 Kentucky defensive tackle Octavious Oxendine (8) celebrates getting a sack during the first half of the team's NCAA college football game against LSU in Lexington, Ky., Saturday, Oct. 9, 2021. (AP Photo/Michael Clubb)

LEXINGTON, Ky. (AP) — Kentucky defensive tackle Octavious Oxendine will miss the rest of the season with a lower leg injury sustained in the No. 11 Wildcats’ 42-21 win over LSU.

Coach Mark Stoops wasn’t more specific about Oxendine’s injury on Monday but called it a “big loss” considering Kentucky (6-0, 4-0 Southeastern Conference) has already lost nose guard Marquan McCall in the win over Florida with what he described as a lower extremity injury. Senior Abule Abadi-Fitzgerald is listed as the starter for Saturday’s East Division showdown at top-ranked Georgia.

The announcement comes as Oxendine was named SEC co-defensive line player of the week for his play against LSU. The sophomore recorded two sacks among three tackles, earning credit for a sack after forcing an intentional grounding call. He was eighth on the team with 15 tackles, including 3.5 for loss.