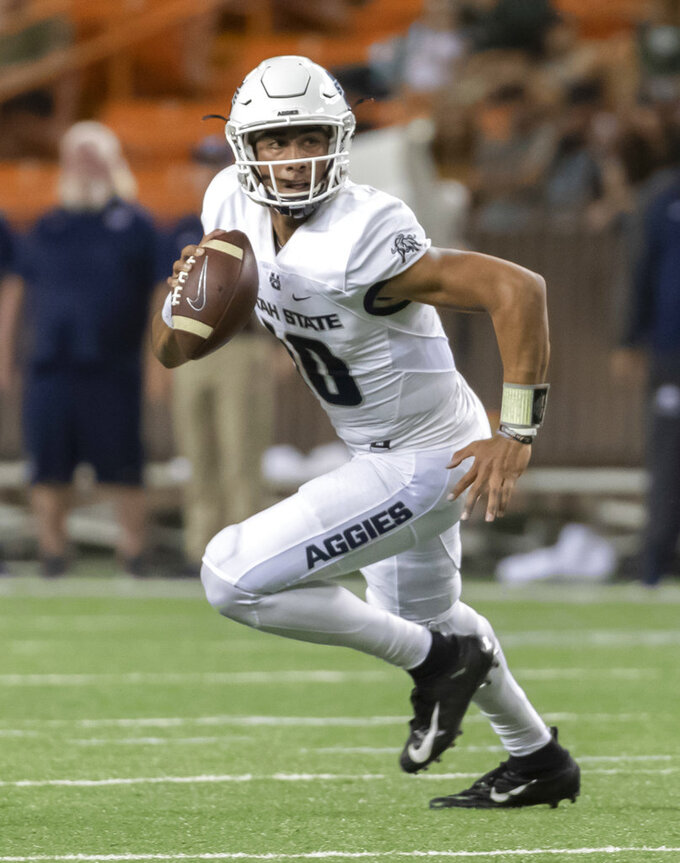 Utah State quarterback Jordan Love (10) rolls out looking for an open receiver to pass to in the first half of an NCAA college football game against Hawaii, Saturday, Nov. 3, 2018, in Honolulu. (AP Photo/Eugene Tanner)

LOGAN, Utah (AP) — Slowing down the blistering pace of Utah State's offense has become a virtually impossible task for nearly every opponent that's faced the Aggies this season.

The No. 14 Aggies enter their regular-season home finale against San Jose State on Saturday entrenched among the nation's best teams at finding the end zone.

Utah State (8-1, 5-0 Mountain West) ranks second nationally in scoring offense (50.1 points per game), trailing only Alabama, and 14th in total offense (4,371 yards). The Aggies also have a knack for piling up points and yards fast. They rank second among FBS teams with 19 scoring drives under a minute.

"What we do on offense is very hard to replicate during the week in practice for scout teams," Utah State coach Matt Wells said. "It's extremely hard at the pace that we're playing."

Sophomore quarterback Jordan Love ranks among the top 30 nationally in passing efficiency (156.4), completion percentage (.651), and passing touchdowns (19). He has thrown for 2,185 yards in nine games.

Utah State is averaging 6.68 yards per play — which ranks 14th nationally. Twenty different players have scored a touchdown this season for the Aggies.

"You don't ever sit around and imagine scoring this many points," Wells said. "We're in a good rhythm, our guys are very confident in what we're doing and again, it goes back to our philosophy. It's what we do and how we do it."

Utah State will have a chance to rewrite some school records against the Spartans.

Strong first quarter starts have helped Utah State fill up the stat sheet. The Aggies have led at the end of the first quarter in all nine games this season and have outscored opponents 138-32 in the first 15 minutes.

"They're outstanding on defense," San Jose State coach Brent Brennan said. "Their quarterback is playing at a really high level. They're very good in the kicking game. It really is the most complete team that we've played this year."

The Spartans (1-8, 1-4 Mountain West) could be in for a long afternoon trying to keep up with Utah State.

San Jose State ranks among the bottom 20 FBS teams in scoring defense (36.1 points per game) and total defense (462.1 yards per game). The Spartans have had equal trouble generating offense, averaging just 22.9 points and 324.1 yards per contest to rank near the bottom of the Mountain West in both categories.

Other things to note going into this week's game between San Jose State and Utah State:

LOVE EXPECTED BACK: Utah State suffered a scare when Love did not play the final two series of the first half or the entire second half of last week's 56-17 win over Hawaii after he took a knee to the helmet. Wells said he has no concerns about Love's health and expects that he'll be ready to go Saturday. Love led the Aggies to touchdowns on their first four drives and finished with 127 yards and a touchdown on 10-of-13 passing.

THE 100 CLUB: Three different San Jose State receivers have a shot at reaching 100 career receptions on Saturday. Justin Holmes enters the game with 99 receptions, Tre Huntley has 95 and Josh Oliver has 91. All three players are seniors. Oliver is the team's leading receiver this season with 580 yards on 49 catches.

GETTING KICKS: San Jose State kicker Bryce Crawford is the only FBS player to rank in the top 30 nationally in field goals made per game and punting average. The senior has made seven straight field goals and averages 1.4 makes per game. He is averaging 43.96 yards per punt.