No. 16 Michigan starts closing stretch at No. 7 Penn State 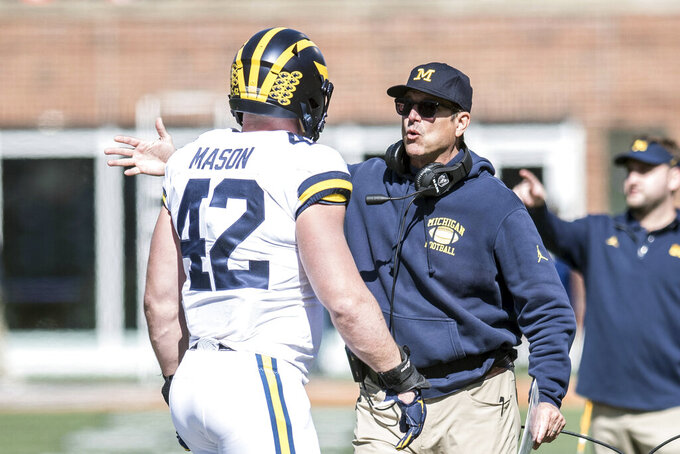 ANN ARBOR, Mich. (AP) — Michigan linebacker Josh Uche recalls being excited when he saw the second half of this season's schedule.

They host No. 8 Notre Dame next week in the Big House under the lights and close the regular season against rival and fourth-ranked Ohio State at home.

"It's big time now," Uche said Monday. "Prime-time television. We have a chance to be legendary.

"We just got to do our jobs, execute and the rest will take care of itself."

That will not be easy.

The Nittany Lions are favored to win by more than a touchdown, perhaps in part because Jim Harbaugh is 1-6 against ranked teams on the road over five seasons as Michigan's coach.

Michigan was embarrassed the last time it had a chance to beat a Top 25 team away from home, giving up five straight touchdowns before losing to Wisconsin 35-14 last month. Badgers running back Jonathan Taylor ran for 203 yards and two touchdowns, finding huge holes behind a line that was pushing the Wolverines around.

"You guys were saying we can't stop the run and we're soft," Uche told reporters. "We kind of framed that in our minds and that's given us a lot of motivation to work hard. That underdog mentality has given us a new flame."

Besides ranked opponents remaining on the schedule, Michigan also has matchups looming against rival and upset-minded Michigan State at home along with road games against Maryland and Indiana.

The Wolverines don't have room for error as they chase their first Big Ten title since 2004, which would end the school's longest conference championship drought.

"Every game from now on is important for us to do what we want to do this season," linebacker Khaleke Hudson said.

Michigan's defense has played at a relatively high level, other than against Wisconsin. And it has been very stingy since playing the Badgers, giving up just 111 yards rushing against Rutgers, Iowa and Illinois over the last three games.

The offense, meanwhile, hasn't figured out how to move the ball and score consistently well. The unit is also failing miserably at taking care of the football.

Michigan ranks 10th in the Big Ten in red zone offense and is slightly worse on third-down conversions.

Fumbling has been the biggest problem under first-year coordinator Josh Gattis, a former Penn State assistant. The team ranks among the worst in college football with nine lost fumbles and 13 turnovers.

"Our defense has their identity," tight end Nick Eubanks said. "Our offense is getting our identity. We found a groove of it. We believe it's coming together."

"With a new offense, adversity is going to come. We came together and overcame the adversity."