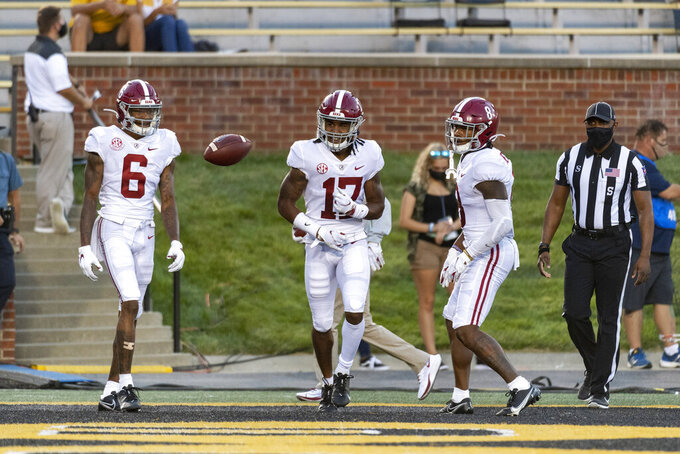 Jaylen Waddle has been one of the nation's most dangerous return men, and a big-play receiver since first stepping on the football field for Alabama.

The only thing holding him back: Four star receivers, one ball. There's still only one ball for the second-ranked Crimson Tide, but Waddle is higher on ‘Bama’s target list now that Henry Ruggs III and Jerry Jeudy left to become first-round NFL draft picks.

“He’s fun to watch, that’s for sure,” Tide coach Nick Saban said Monday, ahead of Alabama's home opener against No. 13 Texas A&M.

Waddle and DeVonta Smith still represent a formidable receiving duo for the Tide, as evidenced by their big games in the opening 3 8-19 win over Missouri. But Smith put up huge offensive numbers already last season, while Waddle could get targeted more than ever while remaining a threat returning punts.

Both are regarded as potential first-round draft picks.

Now Waddle has a greater mastery of all the receiving positions, too, so Alabama offensive coordinator Steve Sarkisian can move him around more.

“Before he was mostly a slot guy, but now he can make plays anywhere on the field,” Saban said Monday. "I think that’s very helpful. You expect people to try to double (team) guys like him.

“So when you can move him around, it makes it a little bit more difficult for the defense.”

Waddle picked up where he left off at the end of the regular season in 2019. He had three receiving touchdowns and 98-yard kickoff return against Auburn in the finale and opened with two more TD catches versus Missouri in last week's opener, He finished with eight catches for 134 yards last Saturday.

The 5-foot-10, 182-pounder has been a reliable playmaker his first two seasons. He's averaging 17.9 yards on his 86 career catches with 15 touchdowns.

But Waddle showed his electric potential throughout while returning punts, even when he wasn't getting the ball thrown his way with such regularity. He has led the Southeastern Conference and ranked in the Top-5 nationally as a freshman and sophomore. Last season his school-record 24.4-yard average easily led the nation.

Waddle's biggest plays against Missouri came as a receiver since he never got a ball punted to him. He leapt for one catch across the middle and immediately clutched the ball close with two Missouri defenders closing in to hit him.

“I kind of can see the defender through my eye so I kind of braced up a little bit,” Waddle said. "I kind of seen him and I jumped. That’s pretty much it.”

But the “fun to watch” aspect of Waddle's game also comes from his ability in the open field. It's how he made a name as a return man, and it keeps the eyes of teammates and fans glued to the field when Waddle heads out to field a punt or kick.

“I think when Jaylen Waddle gets the ball and he’s in open space, everybody on the sideline starts to pay attention,” Tide linebacker Christian Harris said. "It’s the fastest dude I’ve ever seen.

“There’s times he leaves me in practice and there’s nothing I can do about it. I even take an angle and he just takes off. It’s ridiculous.”