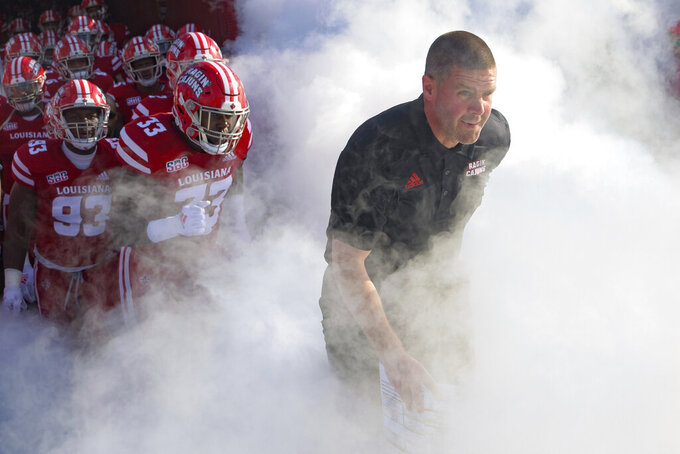 LAFAYETTE, La. (AP) — Billy Napier took his time walking off of Cajun field, soaking in the celebration of a league championship, and at times wiping his eyes, after his final game as coach at Louisiana-Lafayette before he takes over the Florida Gators.

Levi Lewis scored on a career-high 56-yard run and passed for another touchdown, and No. 20 Louisiana-Lafayette defeated Appalachian State 24-16 on Saturday in the Sun Belt Conference championship game.

“I feel like we’ve been chasing this thing down for a long time," said Napier, who coached the Ragin' Cajuns to four straight Sun Belt West Division titles and lost the conference's first two championship games and had the 2020 title game canceled because of the pandemic.

Napier was hired by Florida last weekend to fill the vacancy created by the firing of Dan Mullen, but he insisted on being able to coach for the Cajuns in their conference title game before leaving the team to move on to its bowl game without him.

“Nothing’s more important to me than doing the job for the players on this team, and you’ve got to compliment the players for their ability to focus," Napier said. "Our team was well prepared. There’s no question. We executed our plan tonight.”

Emani Baily rushed for 117 yards, highlighted by his 35-yard touchdown run on a third-and-9 play to give the Cajuns a two-touchdown lead early in the fourth quarter.

Lewis passed for 210 yards without a turnover and finished with 43 net yards rushing as Louisiana-Lafayette (12-1, 9-0 Sun Belt) lengthened its school-record winning streak to 12 games.

“It means the world,” Lewis, a fifth-year senior and three year starter, said of winning the league title. "“I’m going to go home and just go cry. ... It’s been a long time coming to win this championship.”

Cameron Peoples ran for a 43-yard touchdown in the first half for Appalachian State (10-3, 7-2), but the Mountaineers' offense struggled to match its usual production.

The only time this season that Appalachian State scored fewer than 16 points was a 41-13 loss at Cajun Field in October.

Appalachian State coach Shawn Clark noted that the Cajun defense was able to stop the run while playing two deep safeties, adding that when an opponent can do that, “it’s going to be a long day.”

But Brice scrambled for several first downs and kept the Mountaineers' hopes alive in the fourth quarter when he rolled out on fourth-and-10 and connected over the middle with Thomas Hennigan, who slipped tacklers to get into the end zone. The Mountaineers then went for two but the Cajuns pressured Brice into an errant throw.

App State got the ball back once more at its own 35-yard line, down eight with 29 seconds left, but outside linebacker Chauncey Manac stripped Brice near mid-field and recovered the fumble to seal the victory.

“It was a great football game,” said Clark, complimenting both his own team's effort and the Cajuns' execution. "We just couldn’t get into the rhythm that we’re used to.”

Lewis made several big throws on the game's opening series to give the Cajuns an early lead, starting with his 35-yard completion to Peter LeBlanc on third-and-7. Lewis kept the drive going with a 10-yard completion to Dontae Fleming while scrambling to his left on fourth-and-3. That set up Lewis' 27-yard scoring strike over the middle to Michael Jefferson.

The Cajuns took a 14-0 lead on Lewis' long TD run on a read-option play.

“That kid, he’s one in a million — one in 10 million," Napier said of Lewis, highlighting the quarterback's work ethic and knack for infusing teammates with confidence. “It’s one thing to be a great player. It’s another thing to be an incredible person and that’s what that guy is.”

Lewis' 30-yard pass to LeBlanc in the final minute of the half allowed the Cajuns to set up Nate Snyder's 33-yard field goal to make it 17-7 at halftime.

The Mountaineers nearly closed the gap when Corey Sutton got both hands on Brice's 39-yard pass to the corner of the end zone, but cornerback Eric Garror ripped the ball out as both players crashed to the turf. That drive ended with a field goal.

Appalachian State: The Mountaineers' only losses in conference play all season came against the Ragin' Cajuns in Lafayette. It was the third time in four years Appalachian State had played in the Sun Belt title game, beating Louisiana-Lafayette the first two times in Boone, North Carolina.

Louisiana-Lafayette: Napier finished 40-12 in four years — 33-5 during the past three seasons.

““I would say I’m hopeful some of progress we made will be continued,” Napier said, praising how the players at ULL and the surrounding community has affected him and his family. "They’ve impacted us. We’re better because of our time here.”

Appalachian State: Awaits what will be its seventh straight a bowl bid.