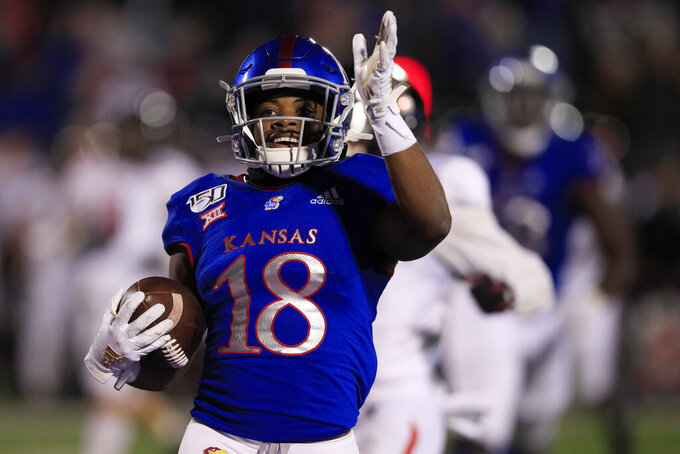 Kansas running back Velton Gardner (18) celebrates as he scores a touchdown during the second half of an NCAA college football game against Texas Tech in Lawrence, Kan., Saturday, Oct. 26, 2019. Kansas defeated Texas Tech 37-34. (AP Photo/Orlin Wagner)

LAWRENCE, Kan. (AP) — The scenes that took place last Saturday in two football stadiums separated by a 100-mile stretch of Interstate 70 were quite similar: The clock ticking to zero, the players streaming off the sideline, the fans pouring from the stands to celebrate with them.

The rousing weekend for bitter rivals creates a compelling backdrop for the latest edition of the Sunflower Showdown, with both programs flying high heading into their meeting Saturday in Lawrence.

"Both teams are coming off good wins. They had a great game last week," Jayhawks quarterback Carter Stanley said. "It's always a big game when it's a rivalry, but kind of what's leading up to it this week makes it a bigger game."

Not just for people from the Sunflower State, either.

Wildcats coach Chris Klieman grew up in Iowa and coached across the Midwest, but his only stint in Kansas — coincidentally — came as a graduate assistant for the Jayhawks in 1997. But that year coupled with what he's heard from others impressed upon him the importance of the game.

"I know it's a big game, obviously, with the Governor's Cup, the trophy game and all those things, and I think those things are neat," Klieman said. "They're part of college football, the rivalries.

"I think those things are great," he added, "but once again we can't get caught up in all that. We have to get caught up with making sure that we come up with great game plans this week and that the guys understand the details of the plan, don't get ahead of ourselves and make sure we have a great week."

Jayhawks coach Les Miles likewise has little in-person experience in the rivalry and, like Klieman, is in his first year with his new team. He was born in Ohio, played at Michigan and has coached all over the country. But he was in the old Big Eight for a bit at Colorado, and he faced the Jayhawks and Wildcats when he was at Oklahoma State.

"I've been fortunate to be around several really quality rivalries. The OU-Oklahoma State rivalry I thought was spectacular. Obviously the Michigan-Ohio State rivalry that I witnessed very close, and the Dallas Cowboys vs. Washington Redskins back then was very significant," Miles said. "And I think the Kansas-Kansas State rivalry has a similar thump to it."

Kansas State has beaten the Jayhawks the past 11 meetings, matching the longest streak in the series held by the Wildcats form 1993-2003. They're also seeking their sixth straight win in Lawrence, which would be a school record for the series.

The game features some of the Big 12's best running backs. Jayhawks star Pooka Williams has run for 704 yards despite missing the opener due to a suspension, while transfers James Gilbert and Jordon Brown have given Kansas State a bruising ground game that pummeled Oklahoma last week.

Miles made an in-season change in offensive coordinators, firing Les Koenning and promoting Brent Dearmon, and the difference has been night and day — especially for the Jayhawks' quarterback. Once looking lost, Stanley has now thrown for 1,900 yards with 19 touchdowns and five picks.

Stanley could have his hands full against the Wildcats, who have allowed just four passing TDs through the first seven games. That mark, which factors in their job against Heisman Trophy contender Jalen Hurts last week, is tied with Ohio State, Kentucky and Penn State for fewest nationally.

Kansas State has committed just three offensive turnovers through its first seven games. The ability of quarterback Skylar Thompson and his running backs to hold onto the ball has been a big reason why the Wildcats have dominated time of possession this season.

The Big 12 issued public reprimands to both schools this week — along with TCU — for the way they handled last week's "field-storming incidents." Kansas State also was fined $25,000 for the jubilant celebration that broke out at Bill Snyder Family Stadium following the biggest home win in years.