No. 22 Wake Forest opens season with new QB against VMI 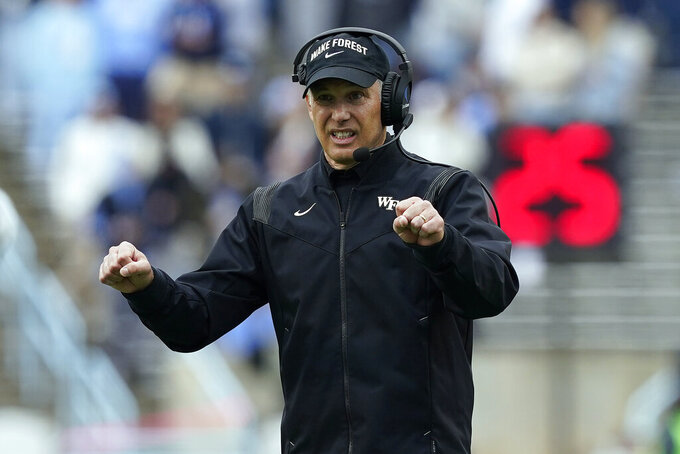 Instead, this is a chance to see how well third-year passer Mitch Griffis can handle the starting role for a veteran team with aspirations of returning to the Atlantic Coast Conference championship game. The first look comes in Thursday's season opener at home against VMI.

“This is going to be Mitch's game,” Clawson said. “He's had a good couple of weeks of practice. He's looked good and he's ready to go. We're very confident with him.”

Hartman's absence due to a non-football medical issue looms over the Demon Deacons after they tied a program record with 11 wins. That means Griffis will make his first career start, and appear in only his eighth game, against the Keydets of the Championship Subdivision.

Griffis said during the preseason that he looks at his job as eventually handing a team back to Hartman in position to contend for the ACC title. That's because Wake Forest otherwise returns 16 offensive and defensive starters after having one of the nation's highest-scoring offenses.

The Demon Deacons are counting on Griffis' years of learning within the program to show up at kickoff.

“He's doing a good job of leading and playing ball and making good reads and passes,” tight end Blake Whiteheart said. “He's doing his job and we're all in support of him. The whole team is backing him. That's what we have to do.”

Led by eighth-year coach Scott Wachenheim, VMI is coming off its first back-to-back winning seasons since 1961-62. The Southern Conference program has also cracked the FCS national rankings in the past two seasons.

VMI has veteran fourth-year leaders on both sides of the ball in quarterback Seth Morgan and linebacker Stone Snyder.

Morgan threw for 2,175 yards and 14 touchdowns last year to go with another three scores on the ground.

“He's gone through his progressions at a very, very high level,” Wachenheim said during the preseason Southern Conference media day. “He's taken the next step in quarterback maturity.”

As for Snyder, he was the conference defensive player of the year for the spring 2021 season and ranked sixth in the FCS ranks last fall with 10.9 tackles per game.

“There's no better name in college football for a linebacker than Stone Snyder,” Wachenheim said.

Wake Forest looks strong at receiver again with A.T. Perry back from a star-making 2021 season along with the return of Donavon Greene from injury.

Perry, in his fourth season, ranked third in the FBS ranks with 15 TD grabs last year playing alongside Jaquarii Roberson, who left early for the NFL. Yet it was Greene — not Perry or Roberson — who was supposed to be the Demon Deacons' top target last year.

Wake Forest lost Greene to a preseason knee injury last year after he had multiple big games in 2020.

Wake Forest won't have linebacker Ryan Smenda Jr., who must sit out after picking up his third targeting ejection last season during the Gator Bowl win against Rutgers.

Smenda was called for the targeting in the third quarter when he went to tackle Gavin Wimsatt, with Wimsatt starting a slide as Smenda dove in to tackle him. Smenda flew over Wimsatt but made incidental forearm contact on Wimsatt's helmet.

The NCAA has introduced a rule for this season allowing a conference to submit a request to the NCAA officiating coordinator to review a replay after the game and potentially overturn it. But the suspension ultimately stood since the review rule wasn't in place at the time of the call.

“I just think it’s shameful that he’s not able to play in this game, it really is," Clawson said. “Everybody you talk to that is in a leadership position will acknowledge that he did not commit the targeting."

VMI is seeking its first win in program history against a nationally ranked opponent from the Bowl Subdivision. The Keydets are also pursuing their first season-opening road win since beating Charleston Southern in 2002.