No. 23 Boston College hoping to stay perfect at Purdue 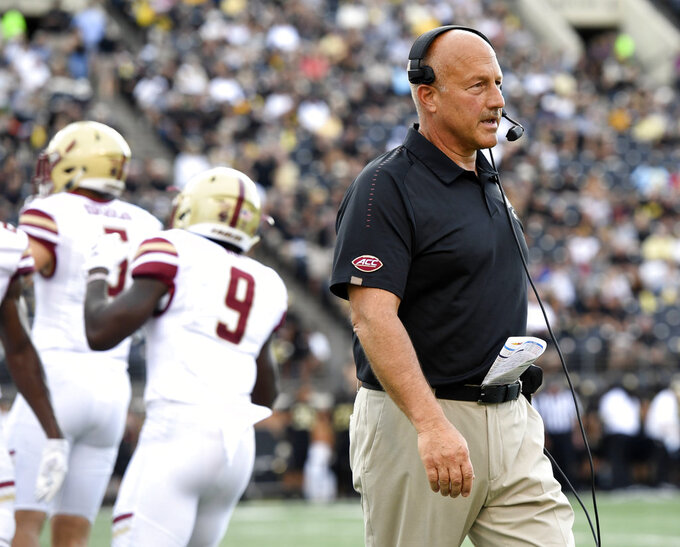 FILE - In this Thursday, Sept. 13, 2018, file photo, Boston College head coach Steve Addazio watches during the first half of an NCAA college football game against Wake Forest in Winston-Salem, N.C. The 23rd-ranked Eagles hit the road with a perfect record and their first ranking in a decade as they try to prevent Purdue from finding answers after a rugged start. (AP Photo/Woody Marshall, File)

Boston College coach Steve Addazio sees a lot of his own program in Purdue.

From the close calls to the young lineups and the intricate passing game to the rebuilding process, Addazio has seen it all before.

Just last September, his team was the one stumbling along, searching for answers as it attempted to dig out of an early-season hole. Now the 23rd-ranked Eagles hit the road with a perfect record, their first ranking in a decade and a challenging test against the hungry Boilermakers.

But Purdue (0-3) has only itself to blame for what's gone wrong.

Personal foul calls against the defense in the final minutes of each the first two games allowed Northwestern and Eastern Michigan to play keep-away, sealing the Boilermakers' fate. Last week, a replay review overturned a go-ahead touchdown, forcing Purdue to settle for the tying field goal only to watch Missouri answer with the winning field goal as time expired.

The Boilermakers' goal this week: avoiding their first 0-4 start since 1982.

Perhaps they can take a lesson from Boston College's response to last season's 2-4 start.

Since then, the Eagles (3-0) have gone 8-2 and jumped back into the national conversation.

AJ Dillon emerged as one of the nation's most productive running backs over the last 10 games, and quarterback Anthony Brown is coming off a career-best 304-yards, five touchdown game at Wake Forest last week. Defensively, the Eagles also are led by a stout safety tandem in Will Harris and Lukas Dennis and defensive lineman Zach Allen.

The combination has helped Boston College chasing its best start since 2007.

Now, the Eagles must show they can beat a hungry team, hoping to emulate their own resurgence.

As usual, Brohm has remained quiet about this week's quarterback plans.

Elijah Sindelar started the opener but threw three interceptions in the first half before being replaced by David Blough. Sindelar missed last week's game with an undisclosed injury, and Blough took advantage by throwing for a school record 572 yards and finishing with a Big Ten record 590 yards in total offense.

Purdue is hoping Blough's encore will be equally efficient.

Dillon and Brown are helping the Eagles make history.

Dillon leads all FBS players with an average of 168.8 yards rushing per game since moving into the starting lineup last October and his 1,688 yards over the last 10 games are No. 2 nationally to Wisconsin's Jonathan Taylor.

Since then, he hasn't slowed down much. Moore leads the Big Ten with 25 receptions, is third in yards receiving per game (87.3), has rushed for 128 yards and has another 179 yards on kick returns.

The Eagles also have two Indiana players on their roster — defensive back Ben Stewart and linebacker Hugh Davis.