No. 25 Fresno State preparing for showdown with Boise State 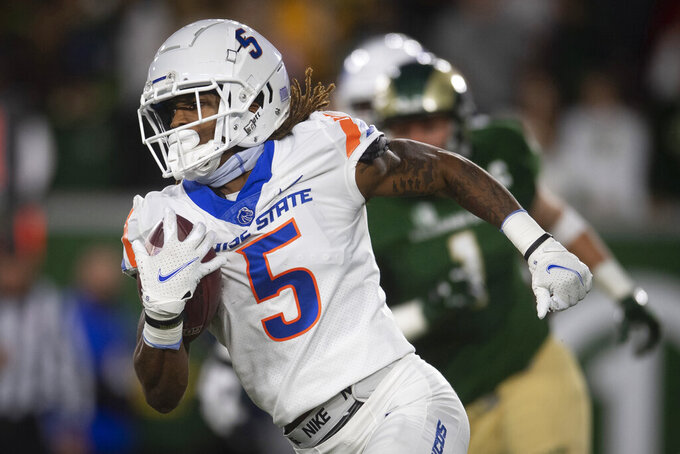 The No. 25 Bulldogs face long-time rival Boise State on Saturday for the first time since 2018, when the two teams met for the Mountain West championship for the third time in five seasons. The game has already been announced as a sellout, Fresno State’s first at home in seven years.

“(The ranking) doesn’t really mean nothing if we don’t take care of business this Saturday,” DeBoer said. “If you look at their losses they’re very close losses and they have beat good teams, very good teams. We already know that you throw the records out the door for this game no matter what. Second of all, if you do the math they’re still right there in the hunt on their half of the conference. There is so much to play for.”

Both the Bulldogs and Broncos have a lot at stake.

Fresno State (7-2, 4-1) leads the West division, has won three straight and is trying to sustain momentum from last week’s win over previously ranked San Diego State. Beating the Broncos would give the Bulldogs a two-game lead, given that they have already defeated Nevada and San Diego State.

Quarterback Jake Haener is coming off a subpar outing against San Diego State but is fourth in the nation with 2,888 yards passing to go with 23 touchdowns.

“He is extremely efficient. His accuracy, his arm strength, the platforms he can throw from,” Broncos coach Andy Avalos said. “He’s got some very talented wide receivers and tight ends to go along with it, but he’s got a quick release and stays on time within the progressions.”

Boise State (4-4, 2-2) has been up and down this season and needs to win two of its final four games to become bowl eligible. The Broncos have won 13 consecutive road games dating to 2017 including beating then-No. 10 BYU in Utah on Oct. 9.

Boise State is coming off its best running game of the season after piling up 177 yards on the ground against Colorado State last week. That boosted the Broncos to 4-0 when they rush for at least 100 yards. They’re 0-4 when held under the century mark, but should get a boost from top back George Holani, who returned in a limited capacity last week. “We’re pretty confident he’s going to be back to full speed,” Avalos said.

The Broncos have yet to string together consecutive wins, a pattern Avalos hopes changes this week. “It’s something that we’ve definitely discussed is being more consistent,” Avalos said.

Fresno State has three coaches, a graduate assistant and one player – linebacker Tyson Maeva – who previously spent time at Boise State. Maeva played for the Broncos from 2016 to 2018 before joining the Bulldogs as a graduate transfer.

The game features two of the Mountain West’s top wide receivers in Boise State’s Khalil Shakir and Fresno State’s Jalen Cropper. Shakir has 49 catches for 777 yards and four touchdowns, while Cropper leads the conference with 10 touchdown catches and is third with 61 catches overall.