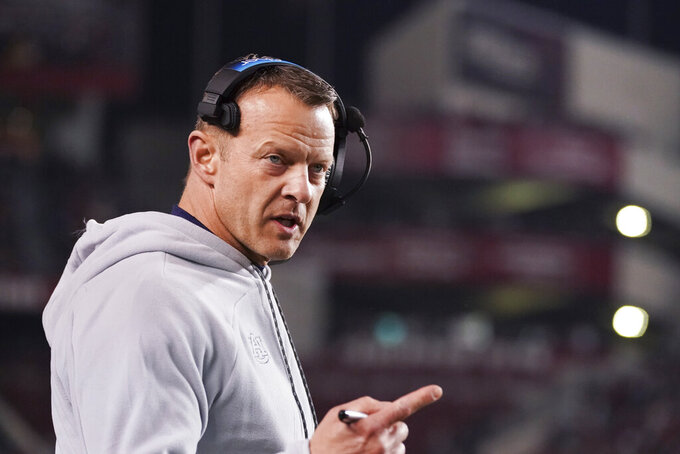 Auburn head coach Bryan Harsin talks to an official during the first half of an NCAA college football game against South Carolina, Saturday, Nov. 20, 2021, in Columbia, S.C. (AP Photo/Sean Rayford)

Line: Alabama by 19 1/2, according to FanDuel Sportsbook.

Alabama's spot in the SEC championship game against No. 1 Georgia is already locked up. But the Tide just got jumped by Ohio State in the AP poll and College Football Playoff rankings and was pushed to the final minutes against both LSU and No. 25 Arkansas. The Tigers could give first-year coach Bryan Harsin his biggest win and change the perception of the season quite a bit.

Alabama QB Bryce Young is coming off a monster game against Arkansas and now faces one of the SEC's weaker pass defenses. Young set an Alabama record with 559 yards in that game and also threw for five touchdowns. The Tide are eighth nationally, averaging 344.1 passing yards a game and Young's 38 touchdown throws rank second. Auburn is 11th in the SEC and 78th overall in pass defense, giving up 235.9 yards a game through the air. But cornerback Roger McCreary is a potential NFL first-round draft pick.

Alabama: LB Will Anderson Jr. has been one of college football's biggest defensive playmakers all season. Anderson leads the nation with 13.5 sacks and 27.5 tackles for loss. The Tigers have been pretty good at protecting the quarterbacks, with help from now-injured starter Bo Nix's scrambling ability. They're third in the SEC in sacks allowed (1.36 per game).

Auburn: QB T.J. Finley makes his second start for the Tigers against the last opponent he started against last season. Finley lost his starting job at LSU after getting benched during a blowout loss to Alabama. He'll have to deliver a stronger performance in this one especially with an inconsistent group of receivers.

Auburn has a 10-5 advantage in Iron Bowls played at Jordan-Hare Stadium since the first one in 1989 and has won the past two. ... Young has attempted 208 consecutive passes without an interception, the second-longest streak in Alabama history behind AJ McCarron (291, 2011-12). ... Alabama, Auburn and Mississippi are the only three teams with at least 350 pass attempts and three or fewer interceptions. ... Tigers LB Zakoby McClain needs 11 tackles to become the first Auburn player with back-to-back 100-plus tackle seasons since Takeo Spikes in 1996 and 1997. ... The Tigers have outscored opponents 27-0 in the fourth quarter of their three SEC wins.