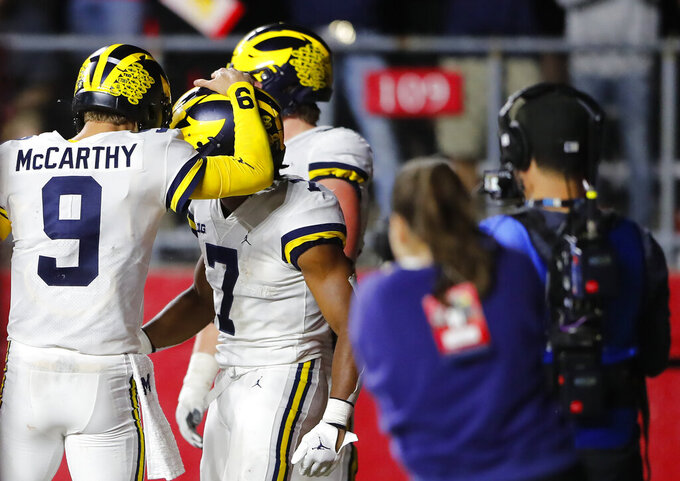 No. 3 Michigan is trying to avoid looking ahead to its showdown next week against rival and second-ranked Ohio State for the Big Ten East title and spot in the College Football Playoff probably on the line. After starting the season 7-1, Illinois is aiming to snap a two-game losing streak and keep its hopes alive to win the Big Ten West crown. The Illini need to win their final two games and hope for a loss by Purdue in its final two games.

Michigan's rushing offense vs. Illinois' defense. Michigan has relied heavily on its running game which averages 251.4 yards per outing, led by Heisman candidate Blake Corum, who ranks third in the country in rushing yards with 1,349. The stingy Illini defense has allowed only two runners to rush for over 100 yards this year and are allowing only 85.9 yards per game.

Illinois: Tommy DeVito. The Syracuse transfer has elevated the offense to new heights, even if the Illini have yet to unlock the deep ball. DeVito could be in trouble Saturday if Illinois is missing No. 3 WR Pat Bryant (concussion) and if RB Chase Brown (right leg injury) can’t make the Wolverines respect the run.

Michigan: QB J.J. McCarthy. The Wolverines passing attack needs to improve before they face Ohio State. McCarthy is coming off his worst performance since becoming a starter. McCarthy has been held to less than 170 yards passing for four straight weeks and five of the past six games.

Michigan has won the last five games vs. Illinois which hasn’t beaten the Wolverines since 2009. … Corum's 1,349 rushing yards are the highest total by a Wolverine since Denard Robinson’s 2010 season (1,702 yards) and the most by a Michigan back since Mike Hart’s freshman season of 2004 (1,445 yards). Corum is tied for first in the nation with 18 total touchdowns. … Illinois is the only team in the nation with three wins over teams in the top 15 of total defense. ... Michigan is one of four remaining undefeated teams along with Georgia, Ohio State and TCU.