No. 4 Penn State at No. 3 Iowa highlights Big Ten schedule 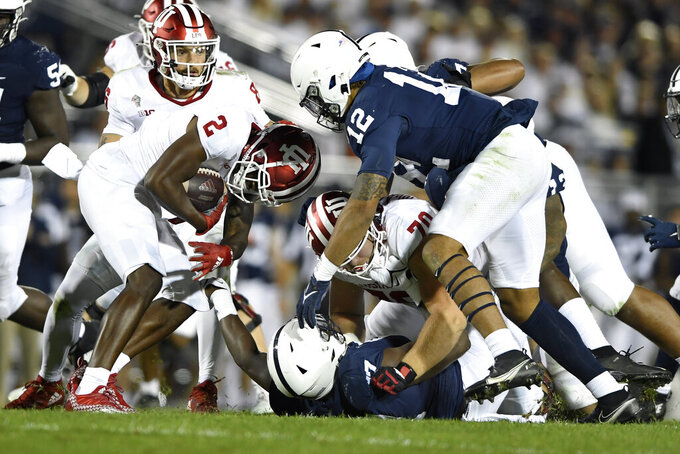 Things to watch during Week 6 of play in the Big Ten Conference:

This will be the biggest game at Kinnick Stadium since a top-ranked Iowa beat No. 2 Michigan in 1985. Expect a defensive battle. The Hawkeyes are second nationally in scoring defense (11.6 ppg), Penn State is third (12.0). The Hawks are first with 12 interceptions and will be tested by the passing combination of Sean Clifford and Jahan Dotson. The Nittany Lions are another in a line of strong run defenses the Hawks have faced, and QB Spencer Petras likely will need to make some plays downfield for Iowa to extend its win streak to 12 games.

Nebraska offensive line vs. Michigan defensive line. The Cornhuskers had two new starters against outmanned Northwestern, and what had been an underperforming line cleared the way for 427 rushing yards and gave up no sacks. The task is much tougher this week. Michigan DE Aidan Hutchinson leads the Big Ten with 5.5 sacks and along with LB David Ojabo helps form a fearsome front seven.

Ohio State seems to be getting its act together after a loss to Oregon and an uninspired win over Tulsa, both at home. The Buckeyes enter their home game against Maryland averaging 50.6 points in the last three games and giving up just 13.6. Over those three games the Buckeyes haven't given up a rushing touchdown and are allowing 86.6 yards on the ground.

Illinois is a 10 1/2-point underdog at home against Wisconsin. The Illini (2-4, 1-2) have a fighting chance with the Badgers (1-3, 0-2), off to their worst start since 1990. New Illinois coach Bret Bielema will be going against the school he led to two Big Ten titles and a share of a third. Wisconsin QB Graham Mertz and TE Jake Ferguson are questionable with chest injuries. Wisconsin's nation-leading run defense is the best thing it's got going. Illinois has been decent running the ball, though its 4.6-yard-per-carry average is inflated because of a 336-yard day against Charlotte last week.

Michigan State WR Jayden Reed heads into the Spartans' game at Rutgers off another electrifying performance. He had 285 all-purpose yards against Western Kentucky last week with 127 yards receiving, an 88-yard punt return, 63-yard kick return and 7 yards rushing. It was the second straight game he ran back a punt for a touchdown.