No. 6 Cincinnati an underdog in Peach against No. 11 Georgia 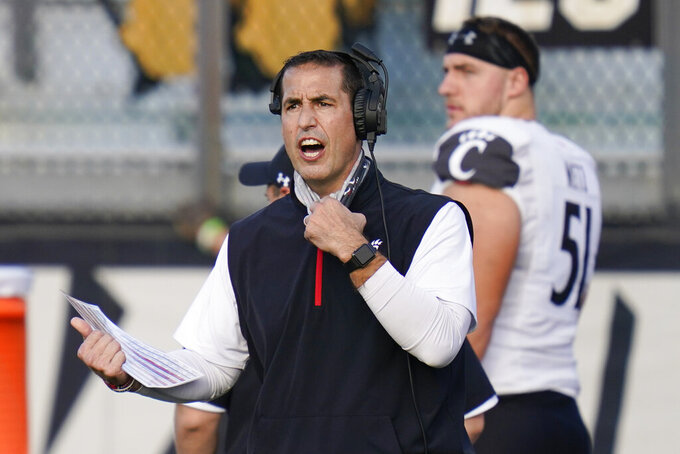 FILE - Cincinnati head coach Luke Fickell shouts instructions to his players during the first half of an NCAA college football game against Central Florida in Orlando, in this Saturday, Nov. 21, 2020, file photo. Fickell knew he might surprise some by suggesting No. 11 Georgia is the best team Cincinnati has faced in his four seasons as head coach. (AP Photo/John Raoux, File)

ATLANTA (AP) — Luke Fickell knew he might surprise some by suggesting No. 11 Georgia is the best team Cincinnati has faced in his four seasons as head coach.

Cincinnati has another opportunity against what he refers to as one of college football's “blue bloods” when the No. 6 Bearcats try to complete an undefeated season against Georgia in Friday's Peach Bowl.

“I think this is the best football team we’ve played since I’ve been at Cincinnati,” Fickell said Thursday.

Fickell wanted Cincinnati to be considered for a spot in this year's College Football Playoff. He knows beating Georgia could help the Bearcats earn respect in future playoff debates.

“It’s a great way for us to measure ourselves as individuals, really to measure us as a program to see where we are, where we’ve come, how we match up against some of the very best,” Fickell said Thursday. “We’re excited.”

Fickell used the Ohio State comparison more than once this week, perhaps hoping to motivate players who remember the lopsided loss.

“We had an opportunity last year to measure ourselves against some of the very best and didn’t do as well," he said. “Hopefully we learned as coaches and players there’s some things you got to do a lot better when you’re playing against the best.”

Georgia coach Kirby Smart has endured a stressful December due to rising COVID-19 results around the campus.

Smart and Fickell would not say if any players would be held out due to positive tests.

“The important thing is the health and safety of our players,” Smart said. “The protocols we have in place are there not to only protect our players but Cincinnati’s players.”

The Bulldogs are 3-0 and have enjoyed an offensive surge since naming JT Daniels the starting quarterback. Georgia averaged 41.7 points and almost 500 yards in the three wins as Daniels passed for nine touchdowns with one interception.

Cincinnati is led by dual-threat quarterback Desmond Ridder, who has a combined 29 touchdowns, including 17 passing.

Georgia will wear black jerseys because each team couldn't wear red. “Those kids like wearing those,” said Smart of the black jerseys, before adding the request came from Peach Bowl CEO Gary Stokan.

“I just think the field looks great when you have both teams wearing colored uniforms,” Stokan said Thursday. “Looks great on TV and on the field.”

After Smart said the black jerseys were Stokan's choice, Stokan said Smart was “too kind to me, giving me way too much credit.” Stokan said Fickell and Smart “made their decisions on their uniforms.”

Said Smart: “I guess I should say it was brought to me in a light that it was encouraged to be colored.”

Safety Darrick Forrest said "I feel like everyone wants to make the best of this opportunity. ... For sure we need to go out there and get this for our program, for our city, just for everybody.”

Georgia’s defense could be bolstered if safety Richard LeCounte and tackle Jordan Davis return from injuries.

Running back James Cook, the Bulldogs' second-leading rusher and fourth-leading receiver, will miss the game following his father’s death this week.

Cincinnati has had no players announce they will miss the game.

“It really just shows our true culture as a team, how we can stay together as a team, what we’ve worked for,” Ridder said. “We know we want to achieve one goal. We’re going to need everyone to do that. Everyone staying together, be on one team."