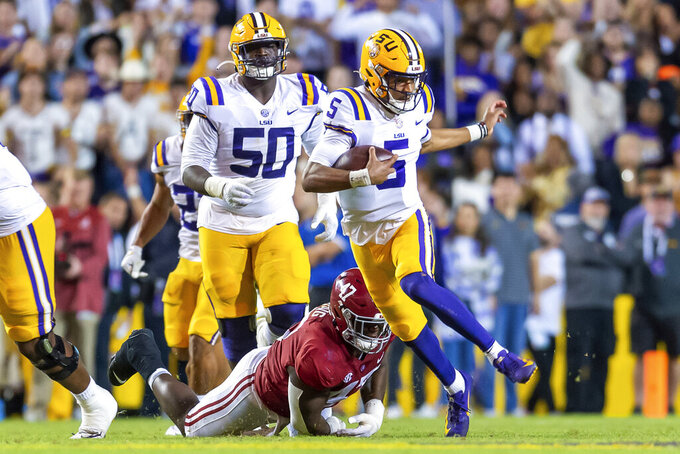 A win over Arkansas would bring the Golden Boot trophy back to Baton Rouge after it spent a year in Fayetteville. It also would also place the Tigers one step closer to an SEC championship game berth.

“We’re not going to walk in with a PowerPoint on the SEC championship race and who has what and all those things,” Kelly said. “But, yeah, it’s there. It’s out there. They know what they’re going for.”

If both LSU and Alabama taste victory Saturday, the Tigers will clinch a trip to Atlanta as winners of the SEC West.

Meanwhile, the Razorbacks hope to claim bowl eligibility down the final stretch and play spoiler for teams like LSU.

“I’ve about come to the fact that if you team’s not ready, they’re going to get beat, and if they are, you’ve got a really good chance to win,” Arkansas coach Sam Pittman said.

Last year, Cam Little made a game-winning field goal in overtime to give the Hogs a 16-13 road victory.

Kelly, meanwhile, said avoiding back-to-back losses to Arkansas will come down to his players’ mindsets.

“We’ve been working on how we think since Day 1,” Kelly said. "It becomes a trap game if you’re not thinking the right way.”

Part of Kelly’s adaptation to coaching in the SEC has been going against large, dual-threat quarterbacks. This week he faces 6-3, 242-pound KJ Jefferson, who has thrown for 1,981 yards and rushed for 425 yards this season.

Jefferson is the only SEC quarterback who has at least 15 touchdowns through the air and five-plus scores on the ground.

“It just seems like every quarterback that we’ve run into this year has been a big, physical quarterback,” Kelly said. “He (Jefferson) is going to be actively involved in the run game. They’re not afraid to run him at any time. We’ve seen him take off at the 5-yard line in the air. He is a physical player. Again, we’re going to have to do a really good job of containing him.”

FIRST TIME FOR EVERYTHING

Kelly rarely coaches against a new opponent, but he will face Arkansas for the first time during his 32 years of coaching. While with Notre Dame, he was slated to face the Razorbacks in 2020, but that game was scratched due to the pandemic.

It also will be his first time facing a Pittman-coached team.

“I have a great deal of respect for him,” Kelly said. “A very good football coach. He’ll have his football team ready to go.”

Two members of LSU’s secondary were suited up for the Razorbacks last season.

Senior safeties Greg Brooks and Joe Foucha both transferred to the Tigers during the offseason. The duo played each of their prior seasons for the Hogs. Both are Louisiana natives.

“They did everything they possibly could for Arkansas,” Pittman said. “I’m glad they’re both playing and having success at LSU. It will be, obviously, different because the last time I saw them on the field was for us versus Penn State. … They’re doing well, playing well, and it seems to have worked out for them.”

Wind chills may be in the low 20s when the game kicks off at 11 a.m. local time.

Pittman announced earlier in the week the two were suspended for this weekend’s game.

Slusher has five starts this year and ranks 12th on the team with 20 tackles.