Notre Dame Stadium no longer place of solace under Freeman 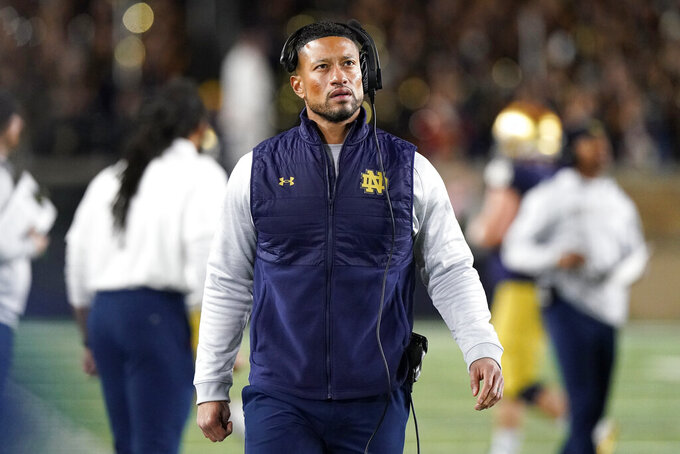 Finding the solution has been a challenge.

In Freeman's first season as head coach, Notre Dame (3-3) is an inexplicable 1-2 in South Bend despite entering each game as a double-digit favorite, according to FanDuel Sportsbook. And they easily could be 0-3.

“There’s not just one answer because if there were, we’d fix it,” Freeman said. “It’s truly an evaluation of everything that goes into it and why we haven’t been able to execute here at Notre Dame Stadium.”

From 2017-21, the Irish went 31-2 on its home turf under former coach Brian Kelly with both losses coming against teams that made the playoff.

Last weekend, Notre Dame lost to Stanford (2-4), the Cardinal's first win over an FBS opponent in more than a year, and in Freeman's home debut the Irish were upset by Marshall (3-3). The Thundering Herd only has one win since then, against Gardner-Webb.

Somehow, though, the Irish gave No. 2 Ohio State (6-0) a serious challenge in Columbus, Ohio, and they produced their two best showings of the season at North Carolina (6-1) and against then-No. 16 BYU (4-3) in Las Vegas.

Freeman believes there’s not much difference between Notre Dame’s pregame routine regardless of the venue.

But he has made one change this season: Players attend mass at the Basilica of the Sacred Heart before making the walk to the stadium with fans lining their path and cheering. Freeman brought back mass at the Basilica after Kelly moved the pregame service to a less public setting, such as a residence hall or another private on-campus location.

Otherwise, the team still stays at an off-campus hotel before games, just like on the road though it avoids what can be tiresome flights. Pregame mass also is offered on road trips, usually somewhere close to the stadium.

Slow starts also have been an issue. Notre Dame has been shut out in the first quarter of all three home games, leading to first-half averages of 4.7 points and 127.3 yards.

Quarterbacks Tyler Buchner and Drew Pyne have struggled early, too, completing just 22 of 44 throws for 68.3 yards and just one total TD through the first two quarters at Notre Dame Stadium.

What’s perplexing about the slow starts is that Freeman and offensive coordinator Tommy Rees script the first 25 plays and the Irish still look out of sorts.

“I have to call it better, period,” Rees said. “I have to get Drew in a rhythm, get the (offensive) line in a rhythm, feel the game and give them confidence right off the bat.”

Notre Dame's next chance to turn things around comes Saturday when UNLV (4-3) visits. The Irish are a 25½-point favorite, their largest spread this season. They'll finish the home schedule against No. 5 Clemson on Nov. 5 and Boston College on Nov. 19 and need to sweep all three to finish with a winning home record.

Then again, Kelly's early teams struggled at home, too. He went 3-4 in his first season, losing to Navy and Tulsa, and lost the next season's opener against South Florida.

Freeman doesn't want to be measured by Kelly's standard. He just wants to win.

“I keep telling myself to build something the right way, I can’t build on what’s been done in the past,” he said. “What coach Kelly did here was tremendous, the wins and the success he had here. But I can’t come in here and say, ‘I have to be Brian Kelly.’ I’ve got to be Marcus Freeman.”