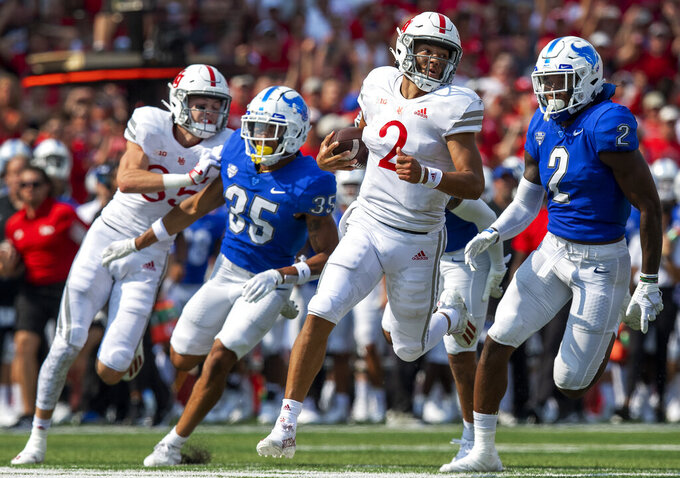 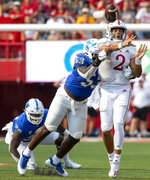 NORMAN, Okla. (AP) — The mere mention of Oklahoma and Nebraska in the same sentence brings back waves of turkey-filled childhood memories for many college football fans.

At the rivalry’s peak between 1970 and 2000, the programs combined to win nine national championships -- five for Nebraska and four for Oklahoma. Their annual November showdowns often sent the winner to the Orange Bowl to play for the title. The best-known game in the series was the “Game of the Century” 50 years ago when No. 1 Nebraska’s beat No. 2 Oklahoma in 1971.

Third-ranked Oklahoma (2-0) will host Nebraska (2-1) on Saturday in the first meeting between the programs since 2010.

“I think there’s been a lot of buildup, and rightfully so,” Oklahoma coach Lincoln Riley said. “Talk about one of the greatest rivalries in the history of this game or the most influential rivalries. To get a chance to bring that game back to life here this year is a great opportunity.”

Nebraska coach Scott Frost is an in-state product who quarterbacked the Cornhuskers to wins over the Sooners in 1996 and 1997. He knows full well what the series meant before Nebraska left the Big 12 for the Big Ten.

“This is my favorite day of the year growing up my entire life,” he said. “One of the best rivalries in sports. It’s kind of a shame it went away, but it’s going to be special.”

Riley has spent time teaching his players about the history of the series. The fans have helped fill in the blanks.

“I think the only thing that makes it weird is because of the response you get on social media,” Oklahoma tight end Jeremiah Hall said. “I’m still trying to wrap my head around what it means to the community.”

Nebraska has struggled in recent years, and many fans are unhappy with Frost. But just like the old days, a win over Oklahoma would immediately make things better.

And just like the old days, Oklahoma's greatness provides an opportunity. Heisman Trophy contender quarterback Spencer Rattler leads a team that expects to reach the playoff. The Sooners are coming off a 76-0 win over Western Carolina.

“They have got about as good of players there is in the country at almost every position,” Frost said. “But I do not want our guys to back down to that, and I do not think they will.”

Riley said Nebraska quarterback Adrian Martinez will be as athletic as any quarterback the Sooners face this season. Martinez ranks 13th nationally with 328 yards of total offense per game. He has 256 yards rushing in three games and averages 7.5 yards per carry.

“His athleticism -- it jumps off the screen,” Riley said. “So, he looks to me improved on the on-script stuff, and then the things that get off script is when he gets really, really good.”

Martinez and Oklahoma linebacker Caleb Kelly were high school teammates at Clovis West High School in Fresno, California. Kelly said they have talked about the game.

“We ran into each other at the beach back home in May,” Kelly said. “He was like, kind of not trying to talk about it, I don’t think. But I was looking forward to it, so I was messing with him a little bit.”

Oklahoma defensive end Reggie Grimes' mother, Mikaela, grew up in Omaha and ran track for Nebraska before transferring to Alabama. She has explained what the old Nebraska-Oklahoma games were about.

“She brings it up as what it is,” he said. “It’s a very historic rivalry. Very important to the game of college football itself. She grew up a Cornhusker. Her entire family, they were Cornhuskers.”

“Now they’re OU fans because of me,” he said.

Nebraska’s defense has looked a bit like those dominant units from yesteryear the past two weeks. The Huskers held Fordham to seven points and Buffalo to three -- the first time Nebraska has held back-to-back opponents to single-digit points since 2010.

“They’ve really improved from looking at some of last year’s tape and onto this year,” Riley said. “I think it’s a much better unit, and they’re playing at a high level."

Nebraska receiver Samori Toure has 308 yards receiving already this season -- second nationally -- and he had two 68-yard touchdown receptions last week against Buffalo. The transfer from Montana has gone over 100 yards in each of the past two games.