Petrino back in game, says he knew he wouldn't stay retired 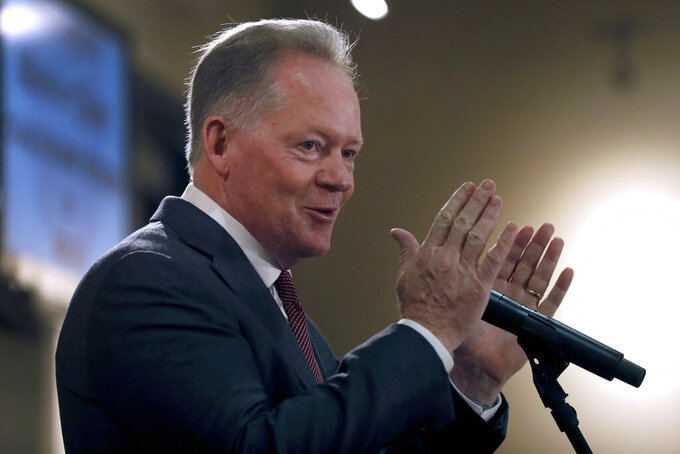 Bobby Petrino speaks after being introduced as the new NCAA college football head coach at Missouri State during a news conference Thursday, Jan. 16, 2020, in Springfield, Mo. Petrino has a 119-56 record in 14 seasons at Arkansas, Western Kentucky and Louisville and replaces Dave Steckel who was fired after winning just 13 games in five seasons. (AP Photo/Jeff Roberson)

SPRINGFIELD, Mo. (AP) — Bobby Petrino is glad to have a job again, even if it's at one of the bottom programs in the second tier of college football.

“I knew I wasn't going to stay retired,” Petrino said Thursday at his introductory news conference at Missouri State. “It was just a temporary retirement.”

Petrino, 58, had been out of the game since his November 2018 firing at Louisville. He landed at the Springfield, Missouri, school largely because of his relationship with athletic director Kyle Moats. The two worked at Louisville together in 2006-07.

Moats said Petrino contacted him about the job after Dave Steckel was fired last week after winning 13 games in five seasons for the Bears of the Football Championship Subdivision. School president Clif Smart signed off on the hiring.

“With a 119-56 record as a head coach at three FBS schools, not only have we hired the best coach available, we have hired one of the best offensive coaches in the history of the game,” Smart said. “We've also hired someone who will run a clean program, be compliant in all aspects of the NCAA and graduate his student athletes. That's been his history.”

Other parts of Petrino's history aren't so flattering. He coached the Atlanta Falcons for 13 games in 2007 before abruptly resigning — leaving a note to the players in the locker room — to return to college coaching at Arkansas.

Petrino led the Razorbacks to the Sugar Bowl following the 2010 season and a No. 5 final ranking the following season, when the Razorbacks won 11 games. A few months after that season ended, Petrino was injured in a motorcycle accident that exposed an extra-marital affair with an athletic department employee. Petrino originally said he was riding alone but later revealed that the woman was a passenger, and that they were involved in a relationship. Petrino was fired.

“One of the things I'm going to be able to teach our players is you'r always going to have obstacles to overcome,” Petrino said. “You're always going to have to work hard on a daily basis. Certainly l made a mistake when I was at the University of Arkansas. I'm fortunate enough to have a great wife and great family and stay together and work forward. That's what we did.”

Petrino resurfaced in 2012 at Western Kentucky, spending one season there before returning to Louisville for the 2014 season. Lamar Jackson, now the star quarterback for the Baltimore Ravens, won the Heisman Trophy in 2016. But the Cardinals struggled after Jackson's departure, and Petrino was let go in 2018.

Petrino said he is fully committed to Missouri State.

“I'm kind of getting on the other side of the hill a little bit,” he said. "I feel great, though, I feel very young, I feel very energized and this is the job that I want.

“Like I told Kyle, if you're going to write a script, write it like this: I come here, be very successful, and I decide 8-10 years from now whether I still want to coach football with a national championship in my pocket. That's what I want to see happen.”