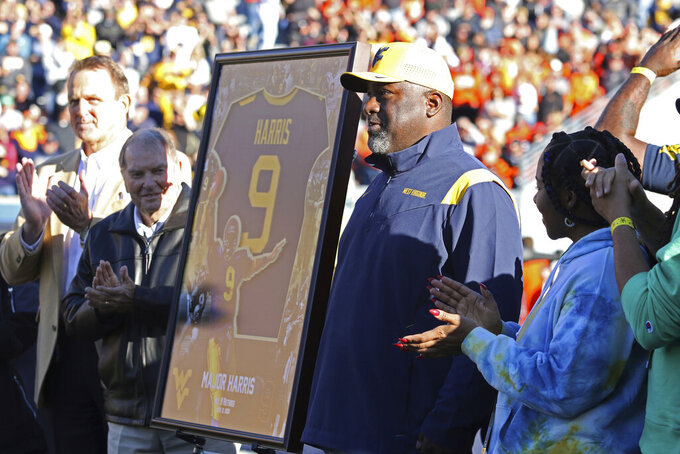 West Viginia's Major Harris has his jersey retired during the first half of an NCAA college football game against Oklahoma State in Morgantown, W.Va., Saturday, Nov. 6, 2021. (AP Photo/Kathleen Batten)

The Cowboys have held consecutive opponents out of the end zone after piling up eight sacks and beating West Virginia 24-3 on Saturday.

The eight sacks were the most for Oklahoma State in a game since 2004.

“We knew we were going to have to play physical,” Harper said. “The whole week we talked about being physical and making plays and doing our job.”

West Virginia (4-5, 2-4), which compiled 492 total yards in a win over Iowa State last week, was limited to 133 total yards Saturday, including 17 yards on the ground against the Big 12′s top rushing defense.

“That was a pretty impressive defensive performance by our guys,” Oklahoma State coach Mike Gundy said. “I’m kind of shocked, to be honest with you, that we could play that well defensively against them on the road as well as they’ve played offensively the last two weeks. Defensively, we just dominated the game. I don’t know what else to say.”

Oklahoma State limited Kansas to 143 yards in a 55-3 win a week ago. It's the first time the Cowboys have held back-to-back opponents without touchdowns since the final game of the 1974 season and the 1975 opener.

Brock Martin said being dominant on defense is "our goal and that’s what we strive for. And I think we show up and show out every week.”

A roughing-the-passer call against West Virginia’s Jared Bartlett on third down gave the Cowboys first-and-goal at the 6 in the second quarter. Sanders found the 6-foot-3 Martin in the end zone on the next play.

Sanders finished 21 of 31 for 182 yards. He threw one interception.

Jaylen Warren closed out the scoring with a 13-yard TD run in the fourth quarter.

West Virginia moved to the Oklahoma State 13 on its opening drive and settled for a field goal. The Mountaineers often were pinned deep at their end of the field and didn’t advance into Oklahoma State territory until their final drive of the game.

West Virginia’s Jarret Doege had little time to get rid of the ball in a collapsing pocket. Doege, who threw for a season-high 370 yards and three scores against Iowa State, went 15 of 22 for 109 yards with one interception Saturday.

“The beat us soundly today,” West Virginia coach Neal Brown said. “Offensively, they just consumed us. Too many negative plays. They won it at the line of scrimmage. That was clear.”

Oklahoma State has won seven straight over the Mountaineers.

Oklahoma State: The trek toward a potential berth in the Big 12 championship game continues for the Cowboys, who took over sole possession of second place after No. 14 Baylor lost at TCU. Oklahoma State has allowed league lows of 16 total touchdowns and 16 points per game.

West Virginia: The Mountaineers’ couldn’t take advantage of the loud home atmosphere on a day where the No. 9 jersey of College Hall of Fame quarterback Major Harris was retired. West Virginia saw a two-game winning streak stopped and will need two more wins over the final three games to become bowl eligible.

Oklahoma State could move into the top 10 of the AP poll for the second time this season.

Oklahoma State safety Trey Rucker was ejected for targeting on a hit on West Virginia quarterback Garrett Greene late in the fourth quarter.