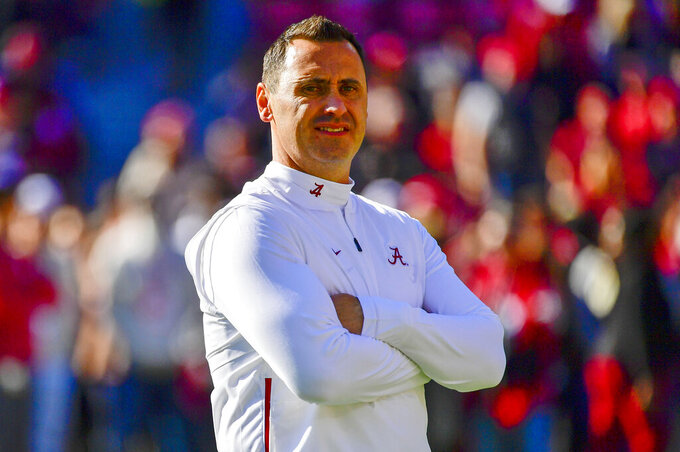 FILE - In this Nov. 9, 2019, file photo, Alabama offensive coordinator Steve Sarkisian watches warmups before an NCAA football game against LSU in Tuscaloosa, Ala. Texas has hired Sarkisian as the Longhorns new coach. The move comes just a few hours after Texas announced the firing of Tom Herman after four seasons with no Big 12 championships. (AP Photo/Vasha Hunt, File)

Steve Sarkisian is the latest Alabama coordinator to be drawing up game plans for a national title showdown before leaving for a new head coaching job.

The top-ranked Crimson Tide's offensive chief is trying to treat the transition as business as usual, saying Wednesday that his “week has been as normal as it could be.”

“Quite honestly, my week for me would be a normal game week as if I hadn’t taken the Texas job,” Sarkisian said. “My focus is on the game. I’m prepping for the ballgame.”

But the fact is, Sarkisian is Texas-bound. The Longhorns fired Tom Herman and hired Sarkisian eight days before the national championship game Monday night against No. 3 Ohio State in suburban Miami and following a semifinal win over Notre Dame.

Sarkisian said in his “spare time,” he focuses on Texas, working on assembling a new staff and recruiting.

This is a familiar scenario for Alabama coach Nick Saban, a six-time national champion coach whose staff has been a prolific head coaching launching (or re-launching) pad for the likes of Kirby Smart, Lane Kiffin and Sarkisian.

The difference this time is the accelerated time frame from Sarkisian’s hiring to the title game.

Others pulling that double duty have taken their new jobs in early to mid December, giving them a head start on recruiting, hiring staff, etc. But generally this is old hat for Saban and Alabama.

Besides the day-to-day coaching, Sarkisian said he has tried “to be a sponge” with Saban. That means studying “why he goes about what he does, some of the decisions he makes.”

“So that if you ever get the opportunity like I’m getting now that hopefully you can take some of these things with you to be a better coach down the road,” he said.

Saban went through a similar transition himself when he was preparing to become head coach at Michigan State with a handful of games remaining while working as Bill Belichick’s defensive coordinator for the NFL’s Cleveland Browns.

His message: Remember that those opportunities wouldn’t come if the players didn’t perform.

“So you kind of owe it to the players to give your best, to do your best to help them get prepared for the game so they can play well in the game,” Saban said. “That’s how I always felt. I think that’s how Sark feels.

Sarkisian has directed one of the nation’s most explosive offenses, with an offensive line honored as the nation’s best, plus three top-5 Heisman Trophy finishers led by winner DeVonta Smith. He won the Broyles Award as the nation's top assistant.

Sarkisian is a former USC and Washington coach who arrived at Alabama as an analyst in 2016 and has used the experience to re-launch his head coaching career.

The list of Alabama coordinators landing head jobs ahead of big games continues to grow:

— Mike Locksley, offensive coordinator to Maryland: Like Sarkisian, Locksley started at Alabama as an analyst. Like Sarkisian, he won the Broyles Award. Then he was hired by Maryland December 4, 2018. Alabama beat Oklahoma in the semifinals before a 44-16 loss to Clemson in the national title game.

— Kirby Smart, defensive coordinator to Georgia. Smart juggled both jobs for more than a month after his Dec. 6, 2015 hiring. The Tide still beat Clemson 45-40.

— Lane Kiffin, offensive coordinator to Florida Atlantic. Kiffin coached Alabama in the semifinal win over Washington in 2016, but after a lackluster offensive performance he didn’t stick around for the 35-31 championship game loss to Clemson. Sarkisian was elevated from analyst but wound up leaving to run the Atlanta Falcons offense. “It was a tremendous experience,” Sarkisian said of his title-game reign over the offense. “It was a unique one.”

— Jim McElwain, offensive coordinator to Colorado State. Nearly a month passed from his hiring to the January 2012 title game rematch against LSU, which ’Bama won 21-0. Now at Central Michigan, McElwain went on to also lead the Florida Gators program. He was hired on Dec. 12.

— Jeremy Pruitt, defensive coordinator to Tennessee. Helped the Tide win the 2017 national championship after accepting the job with the Volunteers that December.

Now, it's Sarkisian's turn. Jones has some advice for the Longhorns quarterbacks about their new coach. The Alabama QB said they should “just say enjoy Coach Sark. He’s a great guy."

“He’s coached at all levels, NFL, college, so you can get a lot of different information from what he teaches you when you watch film,” Jones said. “And then just learn how to think like Coach Sark, because he sees everything the defense does and he’s going to put you in the best position to succeed as a quarterback and an offense.”

First things first. He'll try to make all the right calls for Alabama one more time.