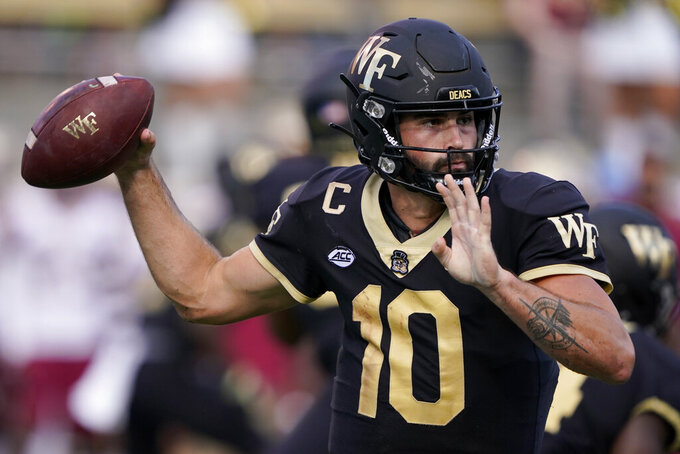 Syracuse already has tripled its win total from a year ago and freshman linebacker Marlowe Wax likes what he's been seeing.

“I feel like the offense week in and week out keeps getting better,” Wax said. “The defense is going to keep feeding off that.”

Syracuse (3-2, 0-1 Atlantic Coast Conference) scored 30 points last week at Florida State but lost on a field goal as time expired. The Orange host No. 19 Wake Forest (5-0, 3-0) on Saturday with a chance to rebound and make a statement. The Demon Deacons are 6.5-point favorites , according to FanDuel Sportsbook.

“Wake Forest is a good team,” said Wax, who has three of the Orange's 20 sacks. "We're just focused on us so we can fix things from last weekend and hopefully knock those fellows off.”

Syracuse coach Dino Babers plans to start dual-threat quarterback Garrett Shrader for the third straight week. He rushed for a career-high 137 yards and three touchdowns and threw for another score against Florida State. Tommy DeVito, the starter the past two years, got the nod the first three games of the season but hasn't seen action since Shrader emerged.

Wake Forest stands as the ACC’s highest-ranked team in the AP Top 25 for the first time since September 2008. The Demon Deacons are coming off a 37-34 win against Louisville on Nick Sciba’s late field goal.

The Demon Deacons and No. 23 North Carolina State are the only two teams in the Atlantic Division race that control their own destiny. The Wolfpack have already earned a win against six-time reigning league champion and now-unranked Clemson.

“I would say for any athlete, really, it’s hard to block out the noise,” Wake Forest offensive lineman Sean Maginn said of the increased attention. “You’re scrolling on Twitter, it’s challenging not to look at those posts, get too involved in the rankings.”

“I think our players feel that (buzz),” Wake Forest coach Dave Clawson said, adding: “I’m glad we’re playing well and that our students and our fans feel that we’re putting out a product that’s worth supporting.”

Syracuse tailback Sean Tucker also rushed for more than 100 yards against Florida State, combining with Shrader for 239. Nobody else was listed in the statistics, marking the first time in at least 40 years that the Orange had only two players record a rushing attempt. Syracuse is averaging 220.6 yards rushing, second in the ACC and 21st in the nation.

Wake Forest stands as the ACC’s last unbeaten team. It is off to the program’s first 3-0 start since 2011, which was the first time that had happened. The Demon Deacons are seeking their first 6-0 start since winning the first seven games in 1944 – nine years before the ACC’s inaugural season – and only their second ever.

Wake Forest entered the week ranked in the top 10 of the Bowl Subdivision in turnover margin. It has seven interceptions and six fumble recoveries while committing five turnovers. The 13 takeaways are tied for sixth-most with No. 8 Oregon, No. 14 Notre Dame and Oregon State.

Syracuse will face a Wake Forest team that features 20 players who started a season ago. Several of them fall into the “super senior” category with the extra year of eligibility given by the NCAA due to the coronavirus pandemic.

“I think the biggest thing between his team and other teams is he’s got super seniors all over the board,” Babers said of Clawson. “He has a very, very veteran group that has been running the exact same system for a long, long period of time.”

In a scheduling quirk, this is the third straight year that the Demon Deacons will visit the Orange for the Atlantic Division matchup. Wake Forest won last year’s meeting 38-14, but Syracuse had won the previous two – 39-30 in 2019 and 41-24 in 2018 in the Orange’s last visit to Winston-Salem, North Carolina.