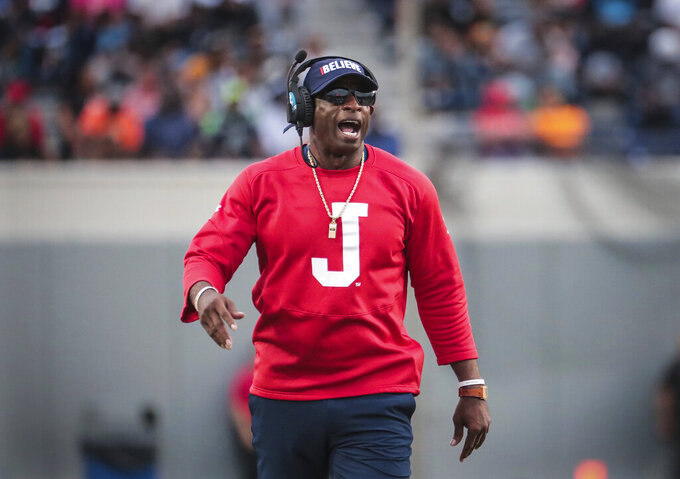 Jackson State coach Deion Sanders is the center of attention as his unbeaten Tigers host Southern in the Southwest Athletic Conference championship game, with a berth in the Celebration Bowl at stake. “Coach Prime” has acknowledged an offer from Colorado for its head coaching vacancy and could announce a decision this weekend. East champion Jackson State looks to follow up its first unbeaten regular season in school history with a season sweep of Southern and second consecutive SWAC title. The Tigers won this season’s first meeting 35-0 in October. Southern won its eighth West Division title and seeks its first conference crown since 2013.

Jackson State’s offense vs. Southern’s defense. Tigers quarterback Shedeur Sanders, one of “Coach Prime’s” two sons on the roster, was named SWAC offensive player of the year after throwing for a school-record 32 touchdowns and 3,083 yards while directing the league's top offense at 448.6 yards and 37.5 points per game. Southern was second at 396.9 yards. JSU also features the league’s No. 3 rusher in Sy’veon Wilkerson (197 carries, 1,0349 yards, 6 TDs). Though the Tigers rolled the first time around, they face a Jaguars defense that has allowed just 24 points the past two games. SU ranks second defensively to JSU at 288.7 yards allowed per game and features a fierce pass rush that recorded a league-high 43 sacks.

Southern: LB Jalan Campbell and DT Tahj Brown. Campbell leads the Jaguars with 74 tackles, including 14 for loss with six sacks. Brown, a first-team All-SWAC selection, is seventh with 28 stops, 11 for loss and 6.5 sacks. Brown and Campbell ranked 8-9 respectively in the SWAC in sacks.

Jackson State: LB Aubrey Miller Jr. The senior has been disruptive all around this fall and earned SWAC defensive player of the year honors in the process. He has 98 tackles with five pass breakups, three forced fumbles, two recoveries with a TD and one sack.

Jackson State ranked fifth in the most recent Championship Subdivision coaches’ poll. ... Southern has won its past two, including a 34-17 victory over Grambling State in the Bayou Classic. ... Jaguars DB Corione Harris, a first-team All-SWAC selection, has a team-high four interceptions. ... JSU’s 41 sacks ranked second in the league, with 15 players recording at least one. ... DE Justin Ragin ranked seventh with 7.5 sacks for 71 yards. ... WR Dallas Daniels, third in the SWAC with 63.2 yards per game and six TDs, will play in the East-West Shrine Game. ... The Tigers have won the last two in the series.