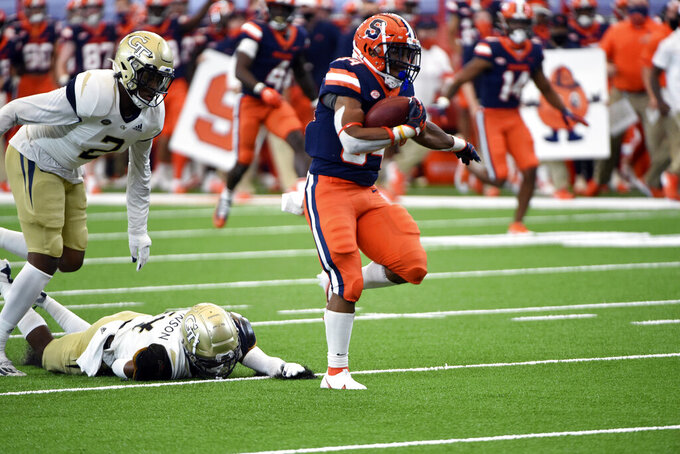 Syracuse running back Sean Tucker (34) runs for a touchdown in the first quarter against Georgia Tech during an NCAA college football game, Saturday, Sept. 26, 2020, at the Carrier Dome in Syracuse, N.Y. (Dennis Nett/The Post-Standard via AP)

SYRACUSE, NY (AP) — Tommy DeVito threw for two scores, Sean Tucker ran for two others, and Syracuse broke out of its offensive doldrums to defeat Georgia Tech 37-20 Saturday for its first win of the season.

The game, which was delayed more than 30 minutes while three Syracuse players were retested for COVID-19, was the first in the refurbished Carrier Dome. Renovations included a new roof, lighting, air conditioning and a big scoreboard.

Tucker was Syracuse's first 100-yard rusher since quarterback Eric Dungey in 2018 and the first freshman to gain 100 yards in five years.

“He really did his job,” Syracuse coach Dino Babers said. “He really went after it. We like guys who are hit at the 20 but not tackled until the 25 or 26.”

Jeff Sims completed 13 of 28 passes for 174 yards and one touchdown for the Yellow Jackets but had four interceptions at the hands of the opportunistic defense.

“Big focus all week was on not turning the ball over. Obviously, we didn't do that,” said Georgia Tech coach Geoff Collins. "Finishing in the red zone, finishing drives, obviously didn't do that. That's on me. I've go to do a better job getting guys ready. We have to protect the football."

Jahmyr Gibbs, a freshman playing in just his second game for Tech, had 105 yards, the first 100-yard game of his brief career. Dontae Smith had a career-high 75 yards rushing.

Syracuse had scored 16 points, one touchdown and averaged 59 yards rushing in its first two games. In the first quarter alone, the Orange scored 17 points, two touchdowns and Tucker, who had just 23 yards on four carries in two games, registered 73 yards on the ground.

“It was great to see the offense come out and score some points and then the plays being made on special teams with the block (on a Georgia Tech field goal attempt), I thought it was a good team win,” said Babers, who acknowledged things were starting to “mount up” after two losses to open the season. “Do we need to get better? Yes. Are there areas we need to improve in? Yes. But going three games and getting our first win and now having the opportunity to heal up with a bye. Our opponents are all real, there are no gimmes. This bye is coming at a good time.”

Syracuse pulled away on DeVito's strike to Johnson on a quick three-play drive and a defensive score by defensive back Trill Williams, who ran 43 yards after taking a lateral from Ja'Had Carter following his interception of a Sims pass.

“Five defensive takeaways? Extremely impressive,” said Babers, who was even more impressed with the renovated Dome.

“It's super, super impressive. Nothing but a big WOW from all of our players.”

Added Williams: “I thought I was on a recruiting trip again.”

Georgia Tech: Sims is loaded with talent but will have to clean up his turnovers if the Yellow Jackets are to show sustained improvement. The freshman now has eight interceptions in the young season.

Syracuse: The Orange may have found its answer at running back in Tucker. The freshman showed great balance on his first score and proved difficult to bring down playing behind an offensive line that has failed to open many holes. Entering the game, Syracuse averaged 2.8 yards a play and was last in the ACC in points scored, total offense, rushing yards, passing yards and sacks allowed. The Orange averaged almost 5.5 yards per play Saturday on 357 yards of offense and allowed only one sack.

Georgia Tech has a week off before hosting Louisville Oct. 9

The Orange also has a bye week before continuing its three-game home stand against Duke on Oct. 10.