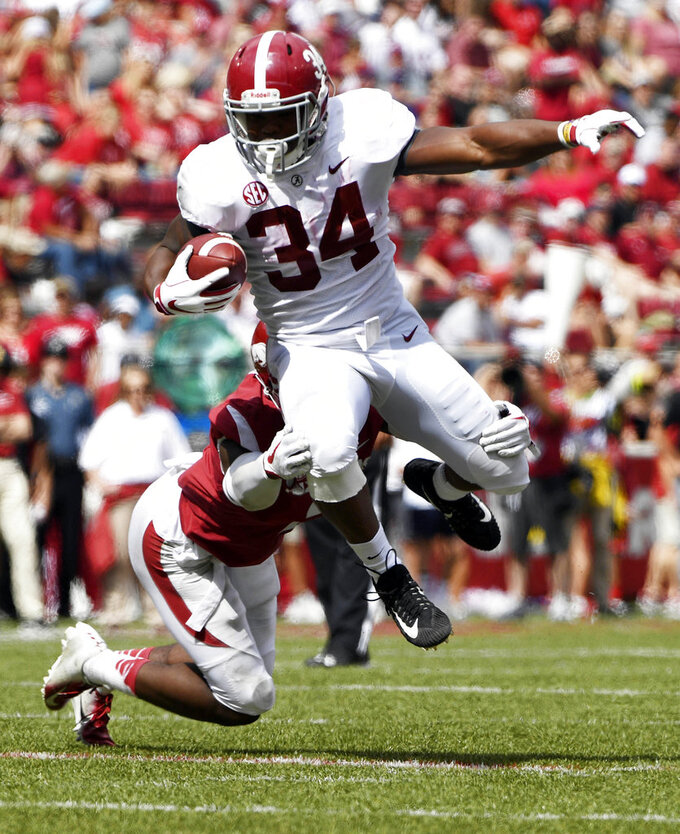 Alabama running back Damien Harris is tripped up by Arkansas defenders Kamren Curl in the second half of an NCAA college football game Saturday, Oct. 6, 2018, in Fayetteville, Ark. (AP Photo/Michael Woods) 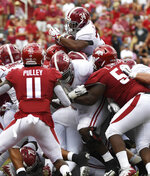 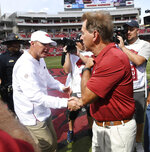 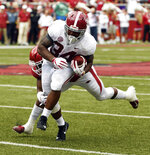 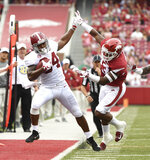 FAYETTEVILLE, Ark. (AP) — Every week Alabama seemingly reaches another milestone with yet another blowout.

Tua Tagovailoa passed for 334 yards and four touchdowns as No. 1 Alabama ran its winning streak against Arkansas to 12 straight with a 65-31 win Saturday. The Crimson Tide has reached 45 points in six straight games for the first time in program history.

It took just one play for Alabama (6-0, 3-0 SEC) to set the tone as Tagovailoa hit tight end Irv Smith Jr. on a pass across the middle that Smith took 76 yards to the end zone and a 7-0 lead just 21 seconds into the game.

Alabama coach Nick Saban has coached the Tide to five national titles, but never has he had a team like this.

"I can't make any comparisons. This is a different team with its own identity," Saban said. "You're not really competing against the other team, you are competing against yourself. Are you really playing as well as you're capable of playing? We're obviously playing better on offense than we are on defense."

Tagovailoa fired four first-half touchdown passes, going 10-of-12 overall. The sophomore was a spectator for most of the second half. He has yet to throw a fourth-quarter pass as Alabama has outscored its opponents by a combined 336-96.

"I thought we did an outstanding job on offense," Saban said. "We had a lot of explosive plays, a lot of big plays."

Alabama built leads of 21-0 and 34-14. Tagovailoa hit Jerry Jeudy for scoring strikes of 42 and 60 yards in the second quarter.

"He is a fantastic leader and you can definitely see that," Morris said. "They do a good job of moving him around and his receivers good a good job of finding holes."

Defensively, Saban said the Tide has a lot of work to do to meet the level of play the offensive is playing at.

"We made a lot of mistakes on defense," said Saban after giving up 405 yards to Arkansas (1-5, 0-3). "We didn't play very well as a unit. We had lots of opportunities to get off the field on third down and we just didn't do it, which allowed them to extend drives.

"I don't think you beat the other team when you give up 31 points like we did today, from a defense perspective."

Alabama: Some fumble issues and shoddy defense will give coach Nick Saban more than enough to complain about after yet another easy victory. Tagovailoa has thrown 18 touchdown passes and no interceptions and has yet to throw a fourth-quarter pass. The Crimson Tide have scored 45-plus points in all six games this season, the best in program history.

Arkansas: The Razorbacks might be able to win an SEC game this season, but it was never going to happen against Alabama.

The Arkansas offense was considerably better against arguably the best defense it had faced this season. Ty Storey was 25 of 39 passing for 230 yards and a pair of touchdowns to tight end C.J. O'Grady. Rakeem Boyd rushed for a season-high 102 yards for Arkansas.

ALL THEY DO IS SCORE TOUCHDOWNS

Alabama safety Shyheim Carter intercepted a Storey pass and returned it 44 yards for a touchdown with 12:15 left in the game. The pick-six was the fourth for the Crimson Tide defense this season.

Alabama entered the game ranked No. 1 and did nothing to relinquish that position.

Alabama will host Missouri next week.