Take your seats, 'Bama fans, or you might miss a touchdown 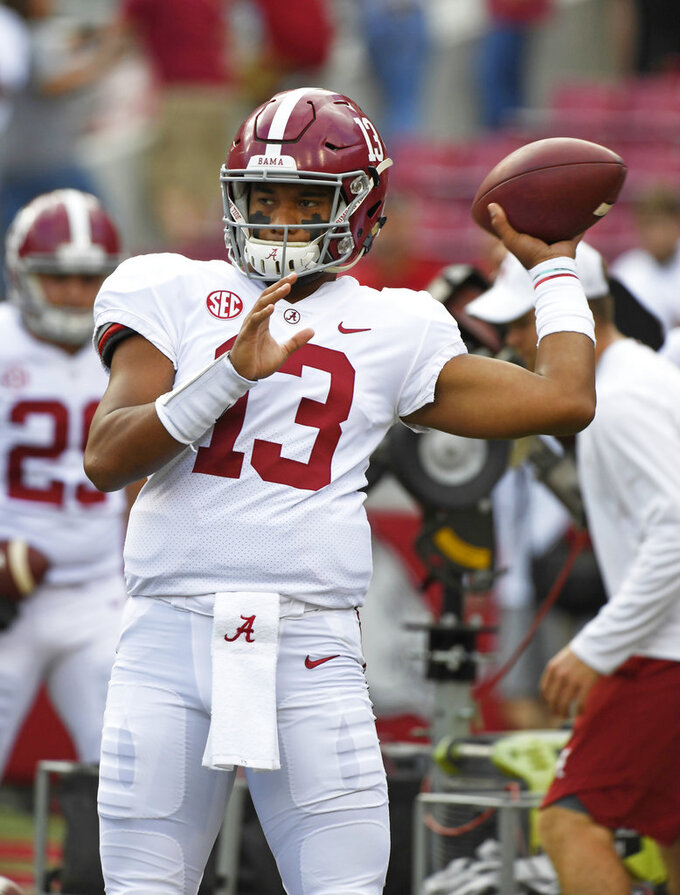 TUSCALOOSA, Ala. (AP) — Alabama fans can't take their time getting settled in for the start of games.

They might miss a touchdown, or two or three.

The top-ranked Crimson Tide has wasted no time pouncing on opponents this season, jumping out to big leads that have effectively taken away any drama about the outcome.

Alabama, which hosts Missouri Saturday night, opened the 65-31 victory against Arkansas with a 76-yard touchdown catch by tight end Irv Smith Jr. Before 10 minutes ticked off the clock, the Tide had scored two more touchdowns with drives consuming just 4:02.

All told, Alabama has scored 238 points in the first half while allowing just 34. Theoretically, the team could have gone scoreless in the second half of every game and still be undefeated.

"That has been able to take advantage of some situations that we see from the defense," Saban said. "And I think the quarterbacks have done a really good job of executing the reads on a lot of these plays.

"It's been a real asset for us to be able to get off to a good start in games and get a little bit of a lead. But we're going to play better and better defenses as we go, so that will become more challenging."

If Alabama fans aren't necessarily riveted to their seats in the final minutes, the opening ones have been much more enticing.

Here are some highlights of Alabama's fast starts:

— Tua Tagovailoa has gone 18-of-20 passing for 462 yards and six touchdowns before the half of the past two games combined. He only attempted one second-half pass.

— The Tide's 39.7-point first half average would rank 26th nationally and fourth in the SEC in points per game. Tagovailoa and Co. are also averaging 375.7 yards in the first half of games.

— The Crimson Tide scored 21 points in the first 10 minutes against the Razorbacks and 28 by the second quarter against Louisiana-Lafayette and Mississippi.

Alabama has avoided coming out sluggish in any game despite being heavily favored in every one.

Tailback Damien Harris said the success boils down to that focus — on "the little things" and film study and executing every play correctly.

Safety Deionte Thompson doesn't mind those quick and early scores that give the defense a nice cushion, if not always much of a break.

"It's just our offense," Thompson said. "They can score fast. I don't know how everybody else feels about it, but I love it. When they score first and they score fast, I love it."