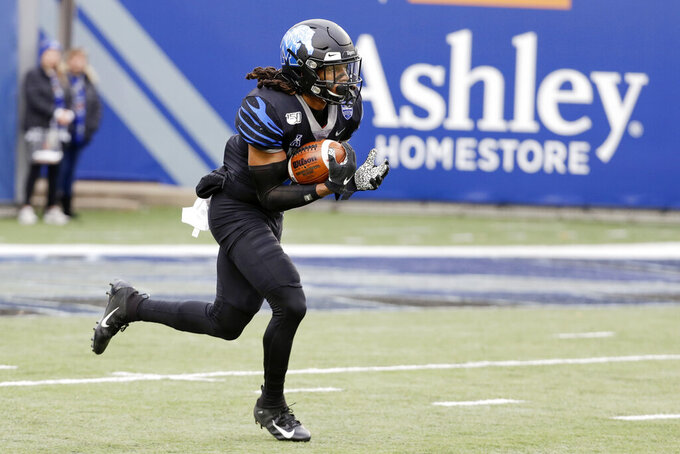 Memphis' Chris Claybrooks runs the opening kickoff back 94 yards for a touchdown against Cincinnati in the first half of an NCAA college football game Friday, Nov. 29, 2019, in Memphis, Tenn. (AP Photo/Mark Humphrey)

Tony Pollard set the standard on kickoff returns during his career at Memphis.

He turned kickoffs into scoring threats and Pollard scored seven touchdowns in three seasons on kickoffs. Now that Pollard has moved on to the NFL's Dallas Cowboys the Tigers are using a group effort to continue that success.

Antonio Gibson, Gabriel Rogers and Chris Claybrooks all have returned kicks for touchdowns this season. No. 16 Memphis has 11 TDs off kickoff returns over the last four years, most in the nation.

“Definitely with him setting the standard, coming behind him is kind of an honor to be able to do that for Memphis," Gibson said. "And with us being a few select that are able to do it, I feel like people come here, they know they got a chance to impact the game on special teams. So that's a good feeling right there."

Chris Claybrooks became the latest Tiger to score on a kick return, setting the tone last week with a 94-yard return for a touchdown to open Memphis' 34-24 victory over Cincinnati. That's why the Tigers (11-1, 7-1, No. 17 College Football Playoff) earned the right to host Saturday's American Athletic Conference championship in a rematch with the No. 21 Bearcats (10-2, 7-1, No. 20 CFP).

"I know I'm stepping into some big shoes to fill, but I feel like I can do that," Claybrooks said. “I’d been watching him all last year and stuff, so I took some notes down from him and I just capitalized.”

Much of the credit goes to Memphis' attention to special teams and the details it places on returns under coach Mike Norvell. The Tigers rank second this season with three kickoffs returned for TDs. They’re sixth in the nation with their average of 26.71 yards per kickoff return.

Norvell, who schemes up ways to get the ball into the hands of his playmakers, uses starters on special teams too.

While Gibson has handled the majority of Memphis' kickoff returns this season, the Tigers also mix it up. Gibson scored his kickoff return to open the second half of a 54-48 win over then-No. 15 SMU on Nov. 2, but he was blocking last week when Claybrooks saw a hole and took off.

"That was actually probably the loudest I've screamed, with that being the first play of the game, for him to take it back," Gibson said. “So when I saw him take off, I didn't even run down the field. I (went) to the fans, screaming my lungs out.”

Cincinnati coach Luke Fickell has watched what Memphis does on special teams and sees the pride players take in getting it done, much like his Bearcats.

"What makes them really good at what they do is the players they put out there," Fickell said. “It was quite a battle from their punt team to our punt team back-and-forth. You saw the chess match and things we do. It's another unique situation playing them back-to-back weeks, how different do we do things in that situation.”

Norvell brought in Pete Lembo this offseason as his special teams coordinator. Gibson said Lembo puts the Tigers in a good position to have a chance every week to return.

"Once coach Pete Lembo gives us the scheme, we do our part," Gibson said. “It's kind of easy for us to do the rest."

Troy is the only school other than Memphis to have a kickoff returned for a TD in each of the past four seasons. Gabriel Rogers has the third kickoff return for a TD this season with a 99-yarder on his lone opportunity all year, which came in the second quarter of a win over Navy on Sept. 26.

Memphis' biggest worry has been getting the chance to return kicks.

"We felt pretty good on our kickoff return plan, and we were unsure if they were going to kick it to us," Norvell said of Cincinnati last week. “But we felt if they did, we'd have a chance at it. To start the game off like that was pretty special.”

Gibson said the Tigers also have plans for when opponents try short kickoffs hoping to avoid their returners.

“So honestly ... no matter where you kick the ball,” Gibson said, “we've got a chance to return it."