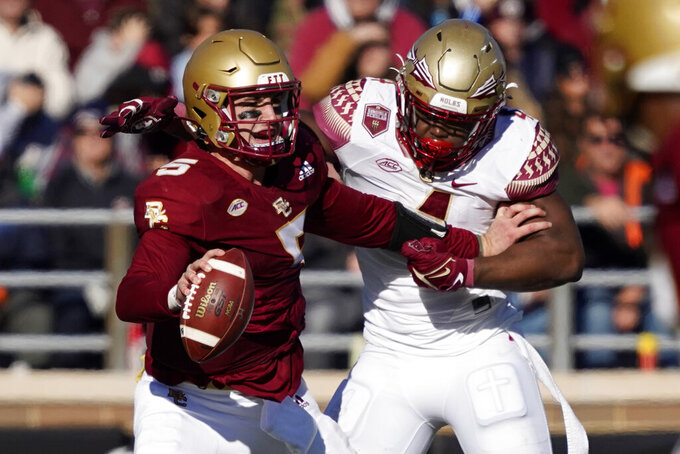 Now, the Seminoles have a shot to keep their own season going a little extra, too.

Jordan Travis threw for three touchdowns and 251 yards and Florida State stopped the Eagles in its own territory in the final two minutes for a 26-23 victory on Saturday.

A week after rallying from an eight-point deficit in the final five minutes for a victory over rival Miami, the Seminoles (5-6, 4-4 Atlantic Coast Conference) rolled to a 23-point lead before holding on to move a victory away from becoming bowl eligible.

“It sets us up for a huge week ahead,” Florida State coach Mike Norvell said. “They've battled back to this point. We're 0-and-4 at the beginning of the season, not many people gave us a chance. We're going into this week with an opportunity to win one more and that's special.”

Florida State has won five of seven after its rough start.

Travis completed 20-of-34 passes with no interceptions, connecting with three different receivers for scores.

“It means everything,” Travis said of the chance to make a bowl. “It's a big week for us. It's a big rival week again. We've just got to get back to work.”

Coming off his five-touchdown day last Saturday in a victory at Georgia Tech — three rushing and two throwing — Jurkovec went 10 of 24 for 148 yards with a TD and one INT. He carried 17 times for 59 yards with a score.

“They've got two really good defensive ends and a defensive tackle and he took some shots early,” BC coach Jeff Hafley said of the pressure on his QB. “I thought we adjusted well and took less shots in the second half. But early on, he took some shots and he’s a tough kid. He hung in there, but we definitely have to protect better.”

The Seminoles led 19-3 at halftime and scored on the initial drive of the second half when Malik McClain made a leaping grab of Travis’ pass in the back of the end zone.

BC then scored two TDs — failing on a two-point conversion on the first — in just over 3 ½ minutes early in the fourth, slicing it to 26-23 on Jurkovec’s 36-yard TD pass to Zay Flowers.

BC converted a fourth-and-2 from their 43 with just over 4 ½ minutes left, but Akeem Dent picked off Jurokvec’s desperation pass as the QB was falling to the ground under pressure at the Seminoles’ 25 on a fourth-and-9 with 1:42 left.

Florida State pressured, hit or sacked Jurkovec nearly every time he dropped back to pass in the opening half, limiting the Eagles to just 95 total yards.

“It was something we spent a lot of time on this week, trying to make him feel uncomfortable,” Norvell said. “He's a talented quarterback that makes all the throws and you see he's able to extend plays with his legs. I thought the effort on the defensive front, how they rallied and how they swarmed, it was special.”

Florida State: The Seminoles’ offense was extremely efficient again, going 4 for 4 in the red zone, raising their total to 29 consecutive conversions. It’s their best streak since 31 straight during a span covering the 2016-17 seasons.

Florida State: At Florida next Saturday.