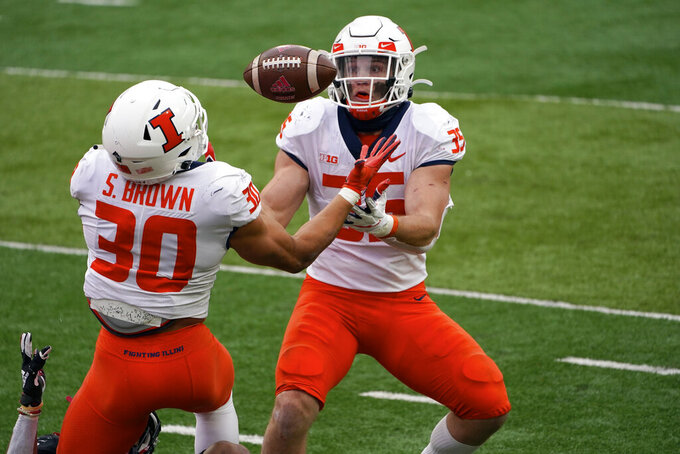 Growing up, the identical twins from London, Ontario, often dreamed about playing college football together. That aspiration was put on hold in 2018 when they went to different schools but rekindled briefly last year when Chase Brown, a sophomore running back, transferred from Western Michigan to rejoin his brother at Illinois.

Chase Brown played four games in 2019 but redshirted for the remainder of the season before returning to the lineup full-time this year. Illinois (2-3) has won two straight games going into Saturday’s showdown at home against No. 3 Ohio State (4-0).

“This is what we dreamt about as kids,” Sydney Brown said during a videoconference this week. “Having him come here has been like having a piece of home here in Illinois.”

Sydney Brown, a 6-foot, 200-pound junior starting defensive back, had five tackles (three solo, half a tackle for a loss) against Rutgers before recording six tackles (one solo) in a win at Nebraska. He has 33 tackles (18 solo, the half-tackle for a loss) and a forced fumble this season.

“When I got the Illinois offer, I knew I wanted to come here because I had an opportunity to play with my brother," he said, according to the Canadian Press. "When I finally enrolled here I just felt like I was at home. We’re so close, he’s my best friend and I don’t even have to think twice about that.”

There’s very little physically that distinguishes the two. Sydney Brown is slightly bigger but Chase Brown is the older of the two, by about 2 minutes. In full gear, the only way to tell them apart on the field is by their numbers - Chase Brown wears No. 2 while Sydney dons No. 30.

Early in their football careers, Sydney Brown played running back while Chase Brown lined up along the defensive line. Predictably, there’s no doubt in Sydney Brown’s mind about who’s the bigger offensive threat.

“Me, obviously,” he said. “No, Chase is doing a great job right now. It’s been real exciting to see him go out on Saturday and show off his talent on the field and show everybody what I know he can do.”

While the two brothers are best friends and roommates, a sibling rivalry exists.

“We always want to outperform the other,” Chase Brown said. “It could be a look, it would be words ... sometimes it gets chippy but that’s just the competitive nature of the sport and us."

During games, the 20-year-old brothers pay attention to what the other is doing on the field and feed off each one another’s accomplishments.

“If Chase scores a touchdown, I’m going to try to score a touchdown on defense or make a big play to help the team,” Sydney Brown said. “It’s cool having somebody just like you on the other side of the ball making plays and helping his team win.

“Of course, we push each other. It’s just the twin rivalry that we’ve had with each other since we were kids. It’s great to have someone like that to push you in practice each week.”