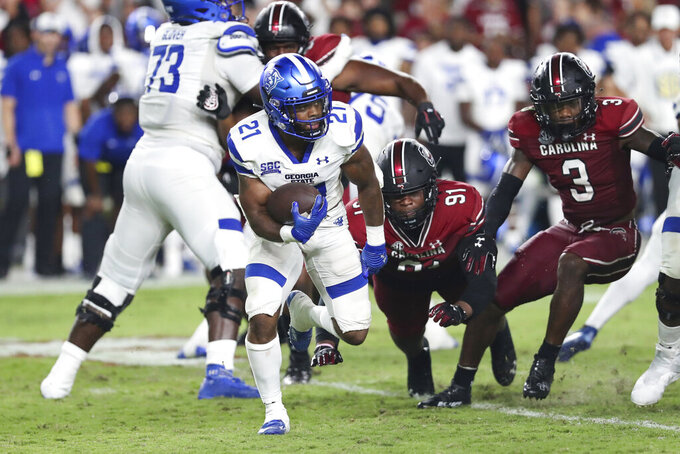 Georgia State running back Jamyest Williams (21) tries to get to the outside during the team's NCAA college football game against South Carolina on Saturday, Sept. 3, 2022, in Columbia, S.C. (AP Photo/Artie Walker Jr.)

Line: North Carolina by 7 1/2, according to FanDuel Sportsbook.

North Carolina needs to get its defensive act together after surrendering 40 points in the fourth quarter of last weekend's 63-61 victory over Appalachian State. Georgia State has an experienced offense that can cause some problems. The Panthers are hosting a Power Five team for the first time. They are eager for a big victory in front of their home crowd to show how far the program has come during its 13-year existence.

North Carolina QB Drake Maye vs. the Georgia State secondary. In his first two games as the Tar Heels starter, Maye threw nine touchdown passes with no interceptions. The Panthers are led by CB Quavian White, who had two interceptions, two tackles for losses including a sack, a pass breakup and five tackles in a season-opening loss to South Carolina. White now shares the school record for career interceptions with nine.

North Carolina WR Kobe Paysour. The second-year player helped fill the void with top receiver Josh Downs sidelined in last week’s win at Appalachian State. Paysour finished with eight catches for 92 yards and a touchdown. If Downs is sidelined again, Paysour could have another prominent role.

Georgia State RBs Tucker Gregg and Jamyest Williams. The duo both rank among the top seven career rushers in school history. Since the start of the 2020 season, Gregg and Williams combined for 1,812 yards and 18 touchdowns last season.

The Tar Heels won last year’s meeting against the Panthers 59-17 in Chapel Hill. ... Georgia State surrendered two blocked punts for touchdowns in its 35-14 loss at South Carolina. ... The Tar Heels are 2-0 for the third time in four seasons during Mack Brown’s second tenure with the program. ,.. Georgia State is playing back-to-back Power Five opponents for the first time in program history. ... This is the second straight road game for the Tar Heels against a Sun Belt opponent. ... The 124 combined points in the win against Appalachian State marked the highest-scoring game in Tar Heels history. ... The Panthers are 1-13 against Power Five opponents. Their lone win was a 38-30 upset at Tennessee in the 2019 opener. ... Georgia State plays at Center Parc Stadium, which opened in 1996 as Centennial Olympic Stadium and was converted to a baseball park known as Turner Field that was home of the Atlanta Braves for 20 years before the Panthers took over the stadium in 2017.