Utah looks to maintain division lead in visit to Stanford 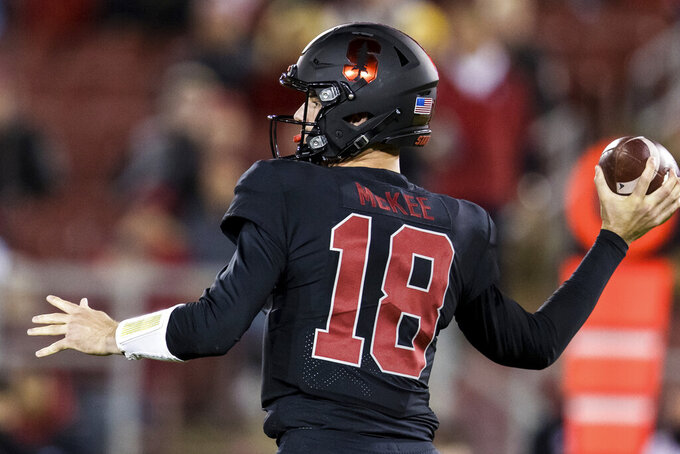 STANFORD, Calif. (AP) — After seizing control of the race for the Pac-12 South title a week ago, Utah knows one small let up could open the competition back up again.

The Utes can take a big step toward locking up a spot in the Pac-12 title game next month in Las Vegas with a victory on Friday night at Stanford.

While the Cardinal (3-5, 2-4) are mired in another disappointing season, they have shown flashes this year that have caught the attention of Utah (5-3, 4-1).

“The only thing that matters for us this week is trying to find a way to beat Stanford," coach Kyle Whittingham said. "We don’t care where we are sitting in the standings and we certainly don’t focus on it. We know they are a good football team, they’ve beaten USC, Oregon, and they are a team that can play really good football. That’s really the nature of the Pac-12. ... This conference is such that you got to be at your best every week or you’re going to get beat.”

The Utes are the perfect example of that. They beat Arizona State three weeks ago to open up a lead in the division only to lose the following week at Oregon State.

Utah then beat UCLA last week and opened up a one-game lead over the Sun Devils, who lost to Washington State. With the Utes having two of their final three games against South bottom-dwellers Arizona and Colorado, a win on Friday night will go a long way toward locking up the division.

The Cardinal have also been up-and-down, following the upset of Oregon with three straight losses to Arizona State, Washington State and Washington, putting their bowl hopes in peril.

Utes running back Tavion Thomas is coming off the best game of his career. He had a season-high 24 carries for a career-best 160 yards, and a school record-tying four touchdowns against UCLA. It was the first four-TD game for a Utah back since Joe Williams in 2016.

Stanford could be without star quarterback Tanner McKee, who is listed as questionable with an undisclosed injury. McKee has been a big upgrade since he took over as starter in Week 2, throwing 14 TD passes and only five interceptions. Shaw said he will wait until the last possible minute for McKee to be cleared.

If McKee is unavailable, Stanford will use both Week 1 starter Jack West and the more athletic Isaiah Sanders.

In other injury news, the Cardinal are hoping to get receiver Michael Wilson back for the first time this season but could be without leading receiver Elijah Higgins.

Higgins, who has 37 catches for 449 yards and four TDs, is listed as questionable.

Shaw is not a fan of games played on a short week even if Stanford has the benefit of being at home instead of traveling like the Utes.

“I wouldn’t call it an advantage,” Shaw said about being at home. “I’d call it less of a disadvantage. I think both teams are disadvantaged. Over the last few years I’ve grown to hate these Friday games. I absolutely hate them. I don’t think they’re fair to the coaches. I don’t think they’re especially fair to the student-athletes. You don’t have enough time for your bodies to recover.”