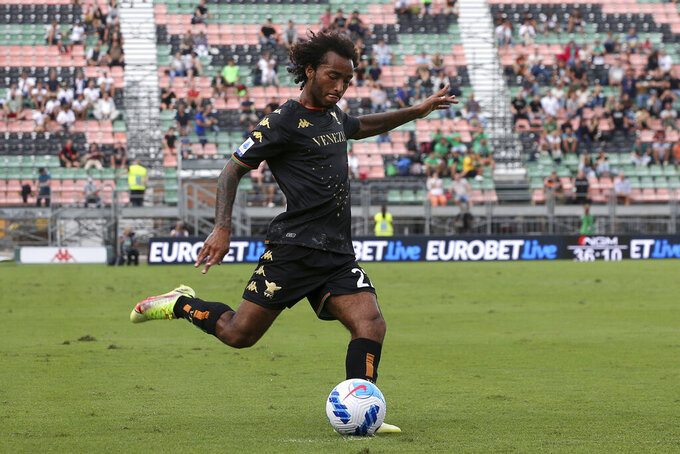 Venezia's Gianluca Busio kicks the ball during the Serie A soccer match between Venezia and Spezia, at the Pier Luigi Penzo stadium in Venice, Italy, Sunday, Sept. 19, 2021. Italian soccer team Venezia is back in the top division for the first time since 2002. And it has tapped Major League Soccer to recruit young Americans in its bid to stay afloat in Serie A. Nineteen-year-old Gianluca Busio arrived in Venice from Sporting Kansas City and 20-year-old Tanner Tessmann from FC Dallas. (Paola Garbuio/LaPresse via AP)

VENICE, Italy (AP) — The team bus is a team boat for American midfielder Gianluca Busio and his Venezia teammates when they play home games in one of Italy's most picturesque cities.

“We drive to a little port and the (water) taxi is waiting for us. That’s the only way you can get there other than walking,” the 19-year-old Busio said.

That's how they arrived to Penzo Stadium in Venice last Sunday for the team's first home game in Serie A since 2002.

The city hasn't changed much since then, but the team has. After winning promotion to Italy's top division and celebrating with a boat parade on the famed canals, the club has turned to an increasingly reliable source — Major League Soccer — to recruit young Americans in its bid to stay afloat in Serie A.

Along with Busio, the team bought Tanner Tessmann and brought in Jack de Vries on loan. Only a handful of Americans have played in Serie A so Venezia's moves constitute a downright wave for the red, white and blue.

On Wednesday, Busio started and Tessmann was a substitute in Venezia's 2-0 loss to AC Milan and midfielder Weston McKennie went the distance for Juventus in their 3-2 win over Spezia. Along with Roma right back Bryan Reynolds, Serie A has never had this many U.S. internationals in the same season.

The success of McKennie as well as Christian Pulisic (Chelsea), Gio Reyna (Borussia Dortmund) and Tyler Adams (Leipzig) has helped pave the way.

“That’s making it a lot easier for every young American ... especially the ones from the MLS,” Busio said.

It probably helps, too, that Venezia has American ownership, though that's become its own trend in Italian soccer. The team has invested in analytics and has also imported players from Nigeria, Norway, Iceland and Israel.

The young Americans know they're not in Kansas anymore — or in Busio's case, Sporting Kansas City. He says he needs to “get stronger” and improve his defense. Media reports said Venezia paid a $6 million base fee that could escalate to more than $10 million.

Tessmann joined from FC Dallas, which has been producing high-quality academy players, on a reported fee of close to $4 million. Dallas alumni include McKennie and Reynolds, a 20-year-old right back fighting for minutes under Jose Mourinho at Roma.

Busio has become a first-choice midfielder for Venezia coach Paolo Zanetti. The 19-year-old De Vries is with Venezia's second team, on loan from the Philadelphia Union.

Tessmann, who turned 20 on Friday, has made three appearances, all off the bench. The 6-foot-3 midfielder wants to improve his off-the-ball movements and defensive positioning to earn his jersey — they're stylish and sold out commercially — on match days.

“Players know where they’re going to be and everything is more fluent," Tessmann said. "MLS is more thinking, slower, so here you just have to know what you want to do and try to execute as fast as you can.”

Of course, both want to add to their national team resumes, and the roster for the next round of World Cup qualifiers is expected next week.

“In terms of the national team,” Tessmann said of his goals, “just try to get called into a qualifying game but I can’t be doing that if I’m not playing, so step one is just try to get minutes and help my team. I’m improving every week, every day, just keep working hard, stay mentally focused."

Harry Kane may have dreams of becoming a kicker in American football, but Tessmann had a scholarship offer to kick for Clemson.

Clemson coach Dabo Swinney, who is Tessmann’s godfather, offered him a scholarship after watching the Alabama native kick a 64-yard field goal at a Clemson summer camp in 2019. He had come in with no training as a kicker.

“I had to learn a bunch of things at the two-day camp,” Tessmann said. "After the camp, Dabo was like, ‘We can get you a scholarship to come kick.’ I committed then but obviously took a different path and signed pro with FC Dallas.”

Busio, born to an Italian father and American mother in North Carolina, signed with Kansas City at age 15 about the time one of his idols, Andrea Pirlo, retired as a player.

“I grew up watching all Serie A games and the Italian national team with my dad,” he said. “Pirlo will always just stand out to me because of the way he plays, composed and cool, the hair and everything. It was something I was drawn to, and now even more.”

The playmaking Busio picked up his first assist for Venezia in last Sunday's 2-1 loss to Spezia. He's averaging 11.2 kilometers (7 miles) run per game — seventh highest in the league.

The grind of a first year abroad can take a toll but one could do worse than Venice, where the biggest decision beyond choosing restaurants and tourist sites may be how to get there — strolling over pedestrian bridges or taking water taxis.

“It's an unreal city, really blessed to live here,” Tessmann said. “I'm a boat taxi guy. It's just so relaxing. That's why you go to Venice, you know, to get on a boat.”