Virginia escapes at Miami, hanging on to win 30-28 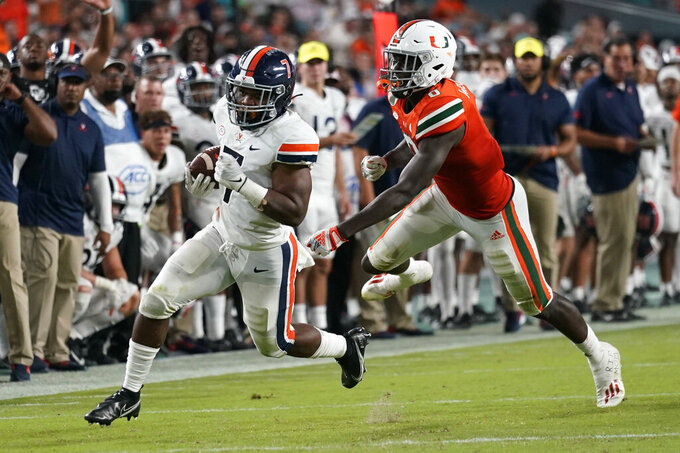 Virginia Cavaliers running back Mike Hollins (7) runs ahead of Miami Hurricanes safety James Williams for a touchdown during the first half of a NCAA college football game, Thursday, Sept. 30, 2021, in Miami Gardens, Fla. (AP Photo/Lynne Sladky) 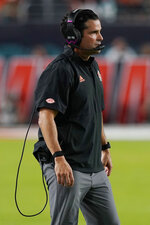 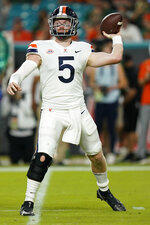 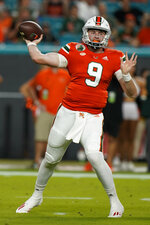 And in the end, the Cavaliers needed every second to escape with a win.

Dontayvion Wicks had a circus catch for a touchdown, Brennan Armstrong passed for 268 yards and Virginia added to Miami’s struggles by beating the Hurricanes 30-28 on Thursday night.

Miami freshman kicker Andy Borregales missed a 33-yard field goal try as time expired, the ball bouncing off the left upright. The Hurricanes drove 75 yards in 14 plays on their final drive, almost stealing a game they never led and in which they trailed 27-14 in the third quarter.

“Got to put him in a better situation. Offense has got to score," said Miami running back Cam'Ron Harris, who rushed for 111 yards and a pair of touchdowns. “We shouldn't have put him in that situation."

Armstrong — who came into the game leading the nation in passing yards per game, averaging 426 per contest — completed 25 of 44 passes for the Cavaliers (3-2, 1-2 Atlantic Coast Conference). Wayne Taulapapa and Mike Hollins had rushing touchdowns for Virginia and Miami native Mendy Alonso came up with a sack for a safety for the Cavaliers in the first quarter, two points that loomed very large at the end.

“We played together," Armstrong said. “We never backed down from anything."

Tyler Van Dyke threw a TD pass and ran for another score for Miami (2-3, 0-1). Van Dyke completed 15 of 29 passes for 203 yards in his second start for the Hurricanes.

“Our fourth-quarter effort was worthy of victory," Miami coach Manny Diaz said. “And ultimately, we came up one play short."

Virginia nearly wasted a two-touchdown second half lead, which was built off a gift.

Armstrong lofted the ball down the middle of the field into a maze of five bodies — three of them from Miami, two of them from Virginia — near the end zone. Miami’s Marcus Clarke leaped and got both of his hands on the ball around the 4, his downfield momentum carrying him toward the goal line.

Clarke couldn’t secure the interception as he tumbled to the ground with Wicks. The ball got loose, bounced off Wicks’ back twice, then into the air. Wicks ended up sitting in the end zone on his left hip, looked up and snared the ball with his right hand for the score.

“When I let the ball go, I was like ‘Oh, oh God, this could be dangerous,'" Armstrong said. “I knew, his No. 1 job, he's always told me ‘Even if you throw it up there, I'm not going to let them catch it.' And he did that, and then shoot, it came right back down into his lap. I was shocked."

Harris had a 57-yard run for a touchdown and Van Dyke got Miami within 30-28 with a 24-yard keeper, but Virginia escaped by a ball going a couple inches too far left at the end.

The Cavaliers won at Miami for the first time since 2011.

“Both teams completely laid it out there," Mendenhall said. “It comes down to one play at the end to decide an outcome."

Virginia: Score first in a Virginia game, you win. Each of the Cavaliers’ last nine games going back to last season have been won by the team that scores first, and Virginia has now won eight consecutive games when jumping out to the first lead of a game.

Miami: Fans were booing often, the stadium was more than half empty (the announced attendance, excluding last season’s pandemic crowds, of 37,269 was the lowest for a Miami home game since November 2012), poor tackling was an issue again and the Hurricanes were missing a slew of players — including quarterbacks D’Eriq King and Jake Garcia — with injuries. Garcia is out for at least a month.

Howard Schnellenberger, who died earlier this year, was the first coach to lead Miami to a national championship when the Hurricanes finished No. 1 in the 1983 season. With his wife Beverlee and several members of his family on the field for the ceremony, the Hurricanes paid tribute to Schnellenberger at halftime by adding him to their Ring of Honor. He won that first title by a 31-30 score, which is what Miami would have won by Thursday had the last kick been good.

Virginia’s win means the Cavaliers avoided their first 0-3 start in ACC play since 2013, when they went winless in all eight conference games.

Miami: Off next week, then visit North Carolina on Oct. 16.