#WeAreUnited players reach out to California Gov. for help 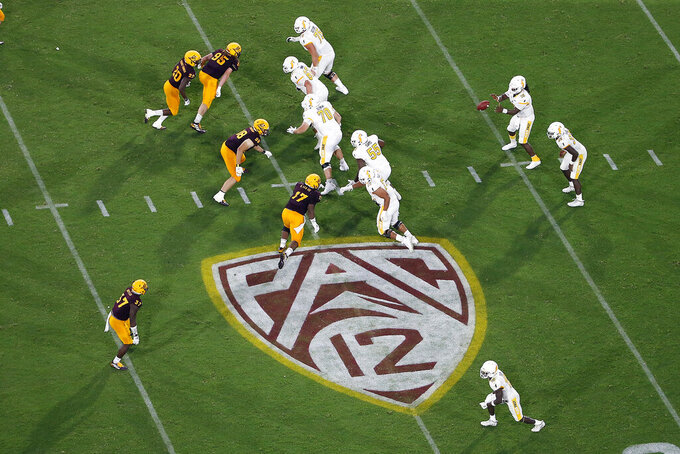 A group of Pac-12 football players with the #WeAreUnited movement met with officials from the California governor’s office Tuesday to discuss concerns about their schools’ COVID-19 protocols and protecting their college eligibility.

Meanwhile, the NCAA's highest governing body put off a decision on whether to conduct fall championship events, and is moving toward passing on making that call altogether.

The Pac-12 players hope an executive order from Gov. Gavin Newsom could mandate player-approved, third-party oversight of COVID-19 rules at the Pac-12′s four California schools and ensure players who opt out of the coming season because of coronavirus won’t lose a year of eligibility.

The Pac-12 has said athletes who opt out will stay on scholarship this season, but whether they would be allowed to preserve their eligibility in that situation is undetermined.

“We really want to be able to move a little faster in getting heath guidelines out there for us,” California offensive lineman Valentino Daltoso told AP during a conference call with several players from the group. “The eligibility piece is huge for us. If you were to opt out without eligibility guarantees you could be effectively ending your eligibility. The governor's office can help us with that.”

A request from comment from the California governor's office was not immediately returned.

After about a month organizing behind the scenes, the players took their movement public Sunday, issuing with a lengthy list of demands related to healthy and safety, racial injustice and economic rights. They say if the demands are not addressed they will opt out of the season.

Elsewhere in college sports, the NCAA Board of Governors met Tuesday to consider canceling or postponing fall championships — in sports such as soccer, volleyball and lower-division football — in all three divisions.

“In order to ensure the health and well being of college athletes, we have to consider all the implications when determing our next steps, and we plan to provide an update to our membership and the public (Wednesday),” NCAA President Mark Emmert said in a statement.

A person who was briefed on the board's discussion told the AP that the board members decided each division will determine what to do with their fall championship events. The Division I Board of Directors will consider the topic Wednesday, the person said.

The person spoke to the AP on condition of anonymity because the board was not making its discussions and plans public.

The NCAA does not control regular season competition, the conferences do. And the NCAA has no say whatsoever in major college football. Whether the football season — or any college sports — can played in the pandemic is still to be determined, but conferences are putting plans in place.

In the Pac-12, football practice is scheduled to start Aug. 17, with the season slated to begin Sept. 26.

The players with #WeAreUnited are expected to meet later this week with Pac-12 officials, but hope the California governor can expedite their initiative.

“The season is creeping up on us and we have no answers,” Stanford reciver Elijah Higgins said.

Pac-12 commissioner Larry Scott responded Monday to the group’s request for a meeting with conference officials with an letter, which was obtained by AP.

Scott detailed how the Pac-12's response to COVID-19 and the school's attempts to play through the pandemic have been guided by the conferences Medical Advisory Committee.

“This committee is comprised of leading experts in the areas of infectious disease and public health,” Scott wrote. “Additionally, the Pac-12’s return to competition plans have always been subject to and in accordance with the advice of public health officials and all relevant government orders, and are continuously evaluated based on the best available science and data."

Stanford defensive end Dylan Boles said the players are seeing discrepancies in how guidelines are implemented and enforced from campus to campus. That's why players are demanding they have approval over a third party that would provide oversight of protocols, especially in testing.

“Everybody wants to play football, but the circumstances are not ideal,” Boles said. “It puts us and our families at risk.”

UCLA defensive lineman Otito Ogbonnia said: “A lot of people feel a lot pressure to not tell when they see guidelines are being broken.”

The Pac-12 has said that any player opting out because of health concerns will remain in good standing with his team. But preserving eligibility is complicated. The NCAA allowed schools to give back a year of eligibility to spring sports athletes who had their regular seasons cut short because of the pandemic shutdown earlier this year.

Whether that can be applied to football players who opt out of a season that is played seems doubtful.

The players said deciding whether to play this season without knowing if they can retain eligibility makes the decision far more difficult.

“We’re just trying to weigh all of our options,” Cal defensive back Josh Drayden said.

About a dozen players have been listed as media contacts for the #WeAreUnited movement in news releases, and they say about 400 of their peers were part of the group chat that helped form the movement.

Since going public, the players said, their numbers have grown.