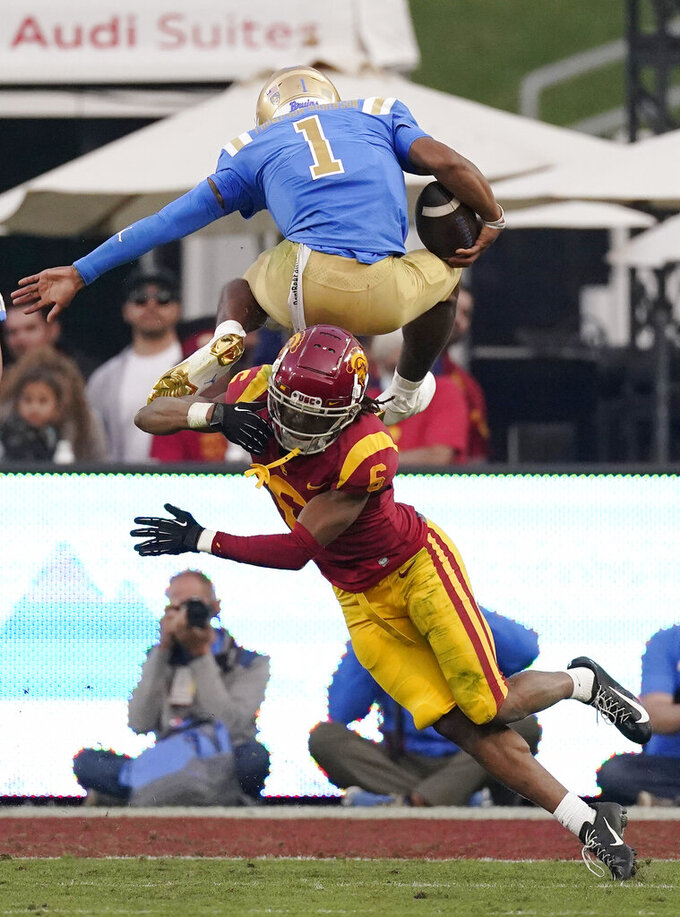 The No. 18 Wolfpack (9-3) and the Bruins (8-4) will face off in the Holiday Bowl on Tuesday night, the first football game to be played at Petco Park, the Padres’ sweet downtown ballpark that opened in 2004.

Doeren and UCLA coach Chip Kelly won’t have to go over ground rules before kickoff at Petco Park, which has hosted soccer, rugby, supercross a basketball game between San Diego and San Diego State and even a Davis Cup first-round match between the United States and Britain on a clay court built in left field. However, the Padres did have to remove several seats down the right field line in order to fit in one end zone for the showdown between quarterbacks Devin Leary of NC State and Dorian Thompson-Robinson of UCLA.

After watching other bowl games get canceled due to COVID-19, the Wolfpack and Bruins have tightened their protocols to make sure the game gets played. NC State is trying to finish with double digit wins for just the second time in school history. Its best finish was 11-3 in 2002 behind junior quarterback Philip Rivers, who went on to star for the San Diego/Los Angeles Chargers for 16 years before finishing his career with Indianapolis.

“Prevention’s the best medicine right now,” Doeren said. “Our guys have been through this. They understand how to follow protocols ... to protect the mission. We’re here to try to win our 10th game. That’s happened one time in school history. There’s a lot at stake.

“Some of the decisions that we make to try to stay healthy are very important decisions,” the coach added. “They’re selfless decisions that our guys have embraced to get another opportunity to try to beat the odds. That’s kind of what’s going on when you watch college football. There’s a lot of people that aren’t getting done. So these two teams have done that.”

The Holiday Bowl signed a five-year deal with the Padres after its home of 42 years, 70,000-seat SDCCU Stadium in Mission Valley, was torn down to make room for San Diego State’s new stadium. The honorary Holiday Bowl chairman is Padres right-hander Joe Musgrove, who grew up in suburban El Cajon and threw the first no-hitter in franchise history on April 9 at Texas in just his second start with his hometown team.

Leary threw four TD passes in the regular season finale against North Carolina to give him 35, breaking the school single-season record of 34 by Rivers in 2003. Thompson-Robinson became the sixth Bruins player to achieve 3,000 yards of total offense in a season. He has 2,409 yards passing and 21 touchdowns, and 609 yards rushing with seven touchdowns. Thompson-Robinson threw for 349 yards and had his hand in six touchdowns in a 62-33 rout over rival Southern Cal on Nov. 20, including hurdling a Trojans defender to score.

NC State All-American left tackle Ikem “Ickey” Ekwonu, who is 6-foot-4 and 320 pounds, is considered by many to be the best offensive lineman in the country. He was a finalist for the Outland Trophy and was named first team All-ACC. When asked about Ekwonu, Kelly looked at Doeren and joked, “Did he leave early, Dave? No? Opt-outs are a thing that goes on during bowl games. I’m not suggesting somebody should. It would have made our Christmas a little better.”

The Bruins have scored 44, 62 and 42 points in their last three games. They’ll be tested by NC State’s 3-3-5 stack defense that is 18th in the country in scoring defense and 24th in total defense. “I think they’re extremely well coached,” Kelly said. “They’ve got a unique scheme that you don’t see every day. But they seem like they have the answers to the test before the test is given. It’s a challenge when you face a team like this.”

Doeren isn’t sure if Rivers’ connection to NC State and the Charges will help earn the Wolfpack more fans in San Diego, but he said the former QB is “somebody we hold very dear. We love Philip. He’s spoken to our team a couple times now and he may be one of the greatest competitive guys at that position when you talk about spirit and everything he does.”