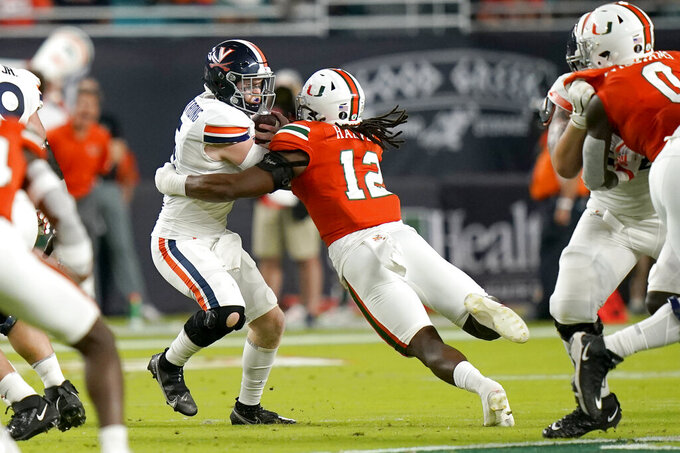 FILE - Virginia quarterback Brennan Armstrong, center left, is sacked by Miami defensive lineman Jahfari Harvey (12) during the first half of an NCAA college football game Sept. 30, 2021, in Miami Gardens, Fla. Harvey has had strong showings this spring that have impressed new coach Mario Cristobal. While Harvey missed the spring game, he will likely get a long look at starting this fall. (AP Photo/Lynne Sladky, File)

A look at Atlantic Coast Conference players this spring who are poised to have standout seasons this fall:

BOSTON COLLEGE: TE George Takacs is a transfer from Notre Dame who started five games last season, serving largely as a blocker. But at 6-foot-6, 247 pounds, Takacs could be a top target for his past and current teammate in quarterback Phil Jurkovec.

CLEMSON: WR Joseph Ngata was injury free and living up to the reputation as the next great Tigers wideout in the spring. Ngata, bothered by injuries and inconsistencies his first three seasons, has 47 career catches for 761 yards and four TDs.

FLORIDA STATE: DE Derrick McClendon II, at 6-4, 240 pounds, could be a defensive disrupter with ACC defensive player of the year Jermaine Johnson off to the NFL. McClendon had 3.5 sacks and forced a fumble as he played in all 12 games as a backup.

LOUISVILLE: WR Tyler Hudson is a transfer from FCS Central Arkansas who is expected to bolster the Cardinals' offense. Hudson had 1,242 yards in catches to go with eight touchdowns.

NORTH CAROLINA STATE: TE Fred Seabrough, a freshman, emerged as a target for QB Devin Leary as Wolfpack coach Dave Doeren limited reps for older starters. Seabrough caught three passes for 38 yards in the spring game and could be an option this fall.

SYRACUSE: QB Justin Lamson played in place of injured starter Garrett Shrader and showed the Orange may be deep behind center. Lamson completed 7 of 10 throws for 151 yards and two touchdowns.

WAKE FOREST: DT Kobie Turner is a 6-3, 285-pound transfer from Richmond, who could find a spot at that position. He had 54 tackles including 10.5 for loss in FCS play last season.

DUKE: WR Sahmir Hagans is a sophomore who made an impression this spring. Hagans had six catches for 82 yards and a score in the Blue Devils spring game.

GEORGIA TECH: RB Dontae Smith will look to take a step forward with the transfer of Jahmyr Gibbs to Alabama. Smith had 296 yards last season, including a team-best 6.9 yards per carry.

MIAMI: DE Jahfari Harvey has had strong showings this spring that have impressed new coach Mario Cristobal. While Harvey missed the spring game, he will likely get a long look at starting this fall.

PITTSBURGH: LB Bangally Kamara is a rising junior who will look to stabilize a position where the Panthers lost two of three starters from their ACC championship team. Kamara played just 80 snaps last fall.

VIRGINIA: RB Mike Hollins was the Cavaliers' third-leading rusher behind quarterback Brennan Armstrong and tailback Wayne Taulapapa. But with Taulapapa in the transfer portal, there's a chance for Hollins to fill the void.

AP Sports Writers Charles Odum in Atlanta and Tim Reynolds in Miami contributed to this report.