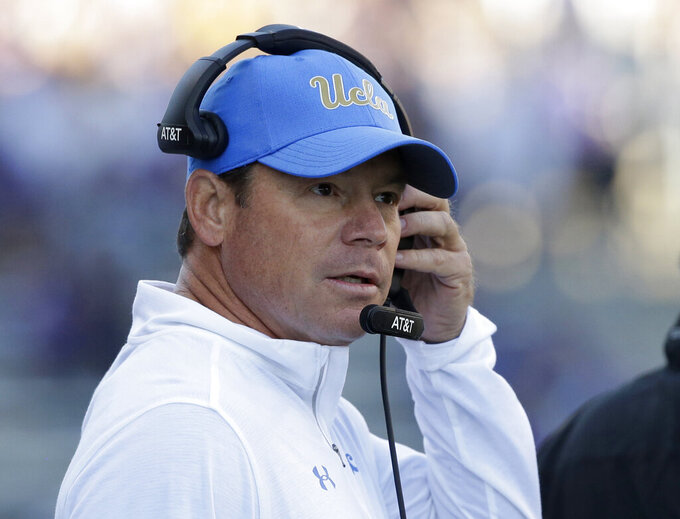 FILE - In this Saturday, Oct. 28, 2017, file photo, UCLA head coach Jim Mora looks toward the field against Washington in the first half of an NCAA college football game in Seattle. Three former UCLA football players are suing the school, alleging they suffered concussions and other injuries that worsened because they were forced to play instead of receiving proper treatment. The Los Angeles Times says former offensive linemen John Lopez, Poasi Moala and Zach Bateman are seeking more than $15 million each in suits naming UCLA regents, former coach Jim Mora, other staff and the NCAA. (AP Photo/Elaine Thompson, File)

LOS ANGELES (AP) — Three former University of California, Los Angeles football players are suing the school, alleging they suffered concussions and other injuries that worsened because they were forced to play instead of receiving proper treatment.

The Los Angeles Superior Court suits contend that former coach Jim Mora and trainers shamed or coerced athletes into continuing to play without proper treatment after they suffered traumatic head or foot injuries.

"What they all have in common is the pattern of brutality and intentional disregard for player health and safety by coach Mora and his staff at UCLA," said attorney Pamela Tahim Thakur, who is representing all three players.

Lopez and Moala allege that they have symptoms linked to chronic traumatic encephalopathy as a result of concussions.

Lopez's suit contends that he was rushed back into play after suffering concussions in 2013 and 2014 during training camp and that he was ridiculed after his first injury. His suit alleges that Mora cultivated a culture of "no excuses" that included "unnecessarily brutal" head-to-head contact during drills and an expectation that the athletes would play through pain.

Lopez suffered a third concussion in 2015 and was forced to retire. Lopez said injuries left him with short-term memory loss, depression and anxiety, that he attempted suicide in 2016 and that his injuries have kept him from finishing school.

Moala contends that he had several concussions and also severe hip injuries that required two surgeries by the end of his college career in 2017. His suit contends the injuries might have been avoided if coaches had taken his complaints seriously.

Bateman alleges that he was compelled to play before his serious foot injuries had healed.

"We strongly deny and will defend ourselves against the allegations made in the lawsuit," said a statement from UCLA's athletic department. "We handle every injury with the highest standard of care, and take potential head injuries very seriously."

The school believes its concussion protocol "is among the strongest in the country" and that decisions allowing players who have suffered concussions to return to play are made solely by the medical staff without input from coaches, the statement said.

Mora did not immediately respond to a text message seeking comment, the Times said.