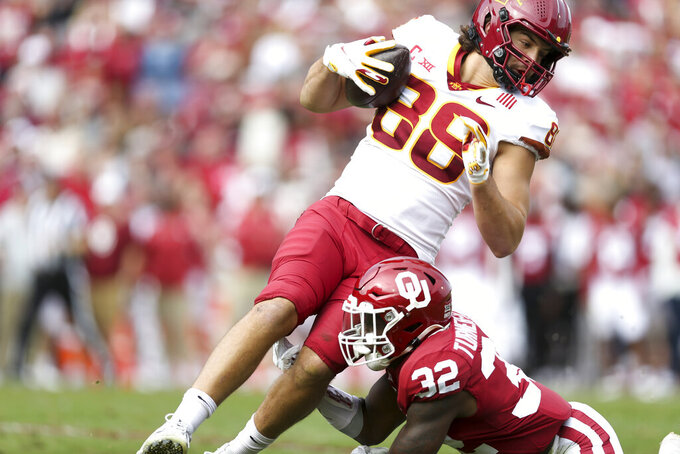 Caleb Williams passed for a touchdown and ran for another, Jalen Redmond returned a fumble for a score, and No. 12 Oklahoma beat Iowa State 28-21 on Saturday.

Kennedy Brooks ran for 115 yards for the Sooners (10-1, 7-1 Big 12, No. 13 CFP), who bounced back from a loss to Baylor and solidified their chances of reaching the Big 12 title game and winning a seventh straight conference title. They also kept alive their slim College Football Playoff hopes and did their part to set up a showdown with No. 9 Oklahoma State next Saturday to close the regular season.

Iowa State has been a thorn in Oklahoma’s side in recent years, beating the Sooners in 2017 and 2020. Oklahoma beat the Cyclones in the Big 12 championship game last year.

“That’s a darn good football team,” Oklahoma coach Lincoln Riley said. "We all know. We’ve been in a lot of battles against those guys.”

The Sooners pushed through, despite at times missing more than 20 players during the week with the flu.

Iowa State tight end Charlie Kolar, playing in his hometown of Norman, Oklahoma, had career highs of 12 catches and 152 yards. Brock Purdy passed for 281 yards and a touchdown for Iowa State (6-5, 4-4), which was eliminated from the Big 12 title race.

Iowa State got the ball at its 14-yard line, trailing 28-21 with two minutes left in the game. The Cyclones drove to the Oklahoma 21, but Pat Fields intercepted a pass by Purdy with 15 seconds remaining to end the threat.

The previous week, the Cyclones lost at Texas Tech on a 62-yard field goal as time expired.

“We never die easy, but man we find some crazy ways to lose sometimes,” Kolar said.

Williams broke loose for a 74-yard touchdown run — the longest play of the season for the Sooners — to tie the game at 7 in the first quarter.

Late in the second quarter, Iowa State drove into Oklahoma territory. Oklahoma's Key Lawrence jarred the ball loose from Purdy, and Redmond got the perfect bounce in stride and took it 42 yards for a touchdown. The score gave the Sooners a 14-7 lead with nine seconds left in the first half.

“Oh man, he could take my spot,” Brooks joked. “He was nice with it. That scoop-and-score, them high knees, ball security. I loved it, loved it. He took off. He even got some speed on him, too. That thing was amazing.”

Williams found Mario Williams in the end zone for an 11-yard score to increase Oklahoma's lead 21-7 late in the third.

Andrew Mevis ran 29 yards on a fake punt early in the fourth quarter to put the Cyclones in Oklahoma territory. Later in the drive, backup Hunter Dekkers — in for the shaken-up Purdy — connected with Chase Allen to cut Oklahoma's lead to 21-14.

Oklahoma later added a five-play, 68-yard drive — all running plays — that ended with a 7-yard touchdown run by Eric Gray with 5:06 remaining. Brooks ran for 45 yards on three carries on the drive.

Kolar caught a 2-yard touchdown pass from Purdy to cut Oklahoma's lead to 28-21 with 2:57 remaining, setting up the dramatic finish.

“You know, losing sucks, and we keep coming up short, and it’s just frustrating,” Kolar said.

Oklahoma: The Sooners once again found a way to win a tight game. Despite getting just 96 yards out of their passing game, Oklahoma claimed its sixth win by seven or fewer points this season.

The Sooners should climb at least two spots after Michigan State and Wake Forest were blown out.

Brooks became the 11th Oklahoma player to rush for at least 3,000 yards in a career. His career total is now 3,035 yards after Saturday’s performance.

“I mean, it’s a great accomplishment being part of those top players that have come through OU at running back,” he said. “To do that, it’s pretty amazing. But I give all the credit to the offensive line that I have and the coaches for giving me an opportunity.”

Oklahoma defensive lineman Perrion Winfrey hammered Purdy late in the first quarter , delivering perhaps the hit of the season for the Sooners.

Winfrey caught Purdy off-guard while he was scrambling.

“I’m glad it wasn’t me,” Riley, a quarterback in his younger days, said. “That was a shot. It was. And those are some of the momentum plays, man, that just get you going. The crowd was going crazy at that point.”

Iowa State’s Breece Hall tied an FBS record by scoring a rushing touchdown in his 23rd consecutive game. Arkansas’ Bill Burnett did it from 1968-70. He ran for 58 yards on 19 carries.